When you think of Web 2.0, one of the first things that comes to your mind is YouTube. Google, who acquired the Web site in 2006, also launched a localized version some two years ago in India. But what has got everyone excited is that YouTube will be live steaming the Indian Premier League. In an email interview with TechShout (TS), Gautam Anand (GA), the Director for Content Partnerships (Asia Pacific) for Google spoke about the YouTube- IPL partnership as well as some other interesting things about the video sharing site. Here is the whole interview: 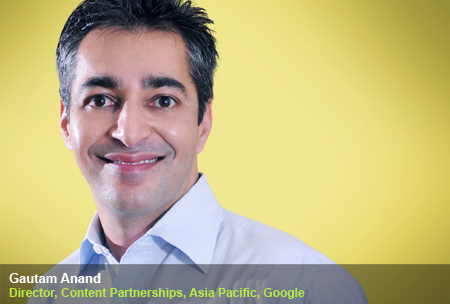 TS: The IPL-YouTube partnership is a first of its kind agreement for Google. What are the expectations?

GA: It’s a 2 year deal. The basic structure of the relationship is that we will place IPL live broadcast of all the matches in this season and the next on YouTube. We will do all of this on a global basis so that users from around the world who use YouTube have a chance to enjoy cricket. Certainly the cricket enthusiasts, sports enthusiasts and, hopefully some new fans who would get exposed to cricket for the very first time. This is the first time Google is live streaming, a mega cricket tournament spanning 60 matches over 45 days, for a major global sport on YouTube. This partnership also marks a first-of-its-kind innovation in live streaming of any global cricketing event providing boundary-less access to the billions of fans across the world, except in USA where re-broadcast options will be available. Now fans from Mumbai to Melbourne will be able to enjoy all the 60 matches of DLF IPL 2010 and join the action with cricket fans from all over the world on-demand and share their experiences on YouTube.

TS: Could you elaborate on any particular factor that has inspired such integration for live sports streaming?

GA: We want to make YouTube a comprehensive destination for online video, and that includes live and on demand sports. Fans across the world love cricket, and we’re excited to be able to bring them IPL matches.

TS: Apart from live streaming, will other important highlights, pitch-side updates, interviews, discussions-in-studio, and off-the-field aspects be shown on YouTube?

GA: Viewers will be able to watch special content related to IPL 3, which includes match highlights, player interviews, wickets of the match, top sixes of the match, award ceremony, pitch reports, and much more, at any time convenient to them on YouTube. Those who watch IPL matches live on YouTube will also get a special treat, an exclusive “YouTube View” that will provide viewers with an alternative view of the match not available on television or any other media. In addition to live streaming of matches on YouTube, Google will also host a special IPL branded Orkut Community which will host live chats with Man of the Match, team owners, contests and match polls to engage fans and audiences while the tournament is on. Users will also be able to enjoy short clips of highlights and other special video content on the YouTube mobile site.

TS: What are the foreseeable implications of the YouTube-IPL deal on other sports? Do you plan to collaborate for any other sports events?

GA: It’s too early to tell, but we’re excited to offer this content to our users around the world.

TS: Do you view YouTube as a platform for marketing lesser known sports in order to increase their popularity?

GA: Our tagline is broadcast yourself. We provide a platform (you can call it a broadcast platform) for anyone including aspiring athletes and mainstream sports franchises like the IPL. We’ve long maintained that distribution over the Web is the future and we want to be part of it by providing our partners with a massive audience and an affordable, global platform to reach that audience.

TS: What kind of traffic does YouTube India get?

GA: YouTube is the most popular video destination across the world and the response in India has been great right from the beginning. Within a short span of over 2 years we have seen significant adoption both from users and local content partners. We have all the leading content partners and TV channel as our partners and with our recent announcement of streaming live IPL matches we expect to offer our users the most exciting experience of enjoying their favorite sport online. As per third party reports, YouTube is one of our top properties in India and has over 10 million users.

TS: In countries where matches are already being broadcasted on TV, will there be any efforts to deliver the live telecast of matches without any delay?

GA: Live streaming on YouTube uses similar technology to broadcast TV. Instead of formatting for your TV, the video is formatted for the Web. But there would be a slight delay in YouTube’s live stream for technical (reasons).

TS: What about the effect on sports broadcasting via television? Should this move be seen as a blow to Multi Screen Media’s Sony and Max channels which until now had been the exclusive telecasters of the IPL?

GA: We feel this will enhance the overall experience of watching IPL and will only complement television viewing with its interactive and highly engaging social elements. The ultimate beneficiary is the IPL because the experience is now a grand multi-dimensional affair.

TS: Can you shed some more light on your revenue sharing agreement with BCCI? By how far will this move positively affect the ad revenue? Are you expecting a particular figure?

GA: We do not share revenue splits. Our expectation is that we will be able to appeal to the sports and cricket enthusiasts and newcomers to the sport. It will appeal to the cricket loving nations like Aus, UK, India and elsewhere. This is the first time a major sporting event will be live streamed on YouTube, so right now we are focusing on offering the best possible to experience to our users.

TS: Has Google zeroed down on any particular advertisers particularly in India who should help monetize this gain?

GA: The advertising options on YouTube will be available only for a limited number of sponsors over the course of the season. Companies will have the opportunity to sponsor live streamed matches, match re-broadcasts, and ongoing viewership of clips and highlights. Advertisers will be able to advertise on the YouTube homepage, the live stream page, video ads during the match itself amongst several other innovative formats. We cannot share the specific details as this point.

TS: This deal seems to leave out the US. Don’t you think it will disappoint cricket buffs and NRIs in the country? Isn’t it also about trying to generate new markets for the sport and sponsors to the maximum possible extent?

GA: In US the re-broadcast option will be available so the viewers will definitely get an opportunity to get enjoy this on YouTube at a time convenient to them.

TS: Could you tell us something about YouTube premiering movies? Do you plan to extend the live streaming for sports and movies?

GA: Both the U2 concert and YouTube Live were live broadcast to the world so this is not a new thing. Striker was the first bollywood film to be premiered on YouTube and it already has over 800,000 views.

TS: Along with Hollywood, do you’ll have any such plans to stream Hindi movie premiers live? Also, can we expect any specific features on the site that should interest Bollywood fans?

GA: The response for Striker has been extremely positive. Within few days of release the movie had 800,000 views which is very encouraging. We are very excited about the response we have got for old popular Bollywood movies and we will continue to work with our partners to make more such movies available on YouTube. With a global distribution platform like YouTube and success of Striker we are confident that more content producers will be encouraged to partner with us. Since we have just started working with long form Bollywood content producers the library currently has limited titles but we are in talks with several content producers and you will be able to see a lot of new titles being added to the library both old and new.

TS: Do you think promotional videos will surpass other means of advertising?

GA: With 20 hours of video uploaded to YouTube every minute, and millions of viewers watching hundreds of millions of videos every day, the popularity of YouTube is a double-edged sword for content creators. There’s tons of great video for users to watch, but sometimes it’s hard for people to find YOUR video. With Promoted Videos, users and partners can kick start the promotion of their content with a campaign that targets the right audience for their video, making it easier for users searching for great content on YouTube to find it. Promoted Videos are now driving millions of video views per week, with clicks having increased 6x since January. We have thousands of advertisers running campaigns every day.

TS: YouTube recently started offering movies for online rental beginning with the Sundance Film Festival. Other than this, any particular deals inked that should get movie buffs excited?

GA: I can’t comment on specific discussions with partners, but we’re excited to make more Bollywood content available on YouTube to fans in India and around the world.

TS: How has the response been to the YouTube HTML5 video player rolled out lately? What about the revamped version of the video playback pages, any specific feature to watch out for?

GA: Our support for HTML5 is an early experiment and we will be expanding the capabilities of the player in the future.

TS: Is there any other exciting premium online content that we can expect in the near future?