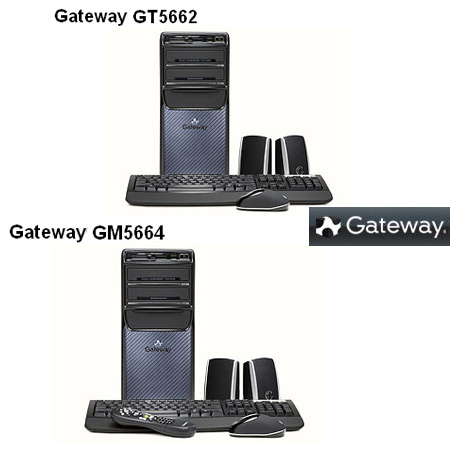 Gateway has rolled out its two new GM and GT series of desktops in the American market. The new GM5664 and GT5662 desktops don’t incorporate Intel’s processor, but instead include the AMD Phenom Processor and DirectX 10 Technology.

Also with these new arrivals, Gateway is introducing a new Hybrid-SuperMulti drive on the GM5664, which will allow users to enjoy Blu-Ray and HD-DVDs on a single drive.

Besides, the manufacturer is targeting the GM5664 and GT5662 desktops towards gaming and entertainment requirements. Hence features such as 3GB memory, extreme quad-core powered AMD Phenom Processor, ATI Radeon HD 2400XT graphics with 256MB video memory and HDMI output are included in the desktops. Moreover Gateway claims that the DirectX 10 technology will impress gamers.

“Gateway’s new retail line up marries high-performance with affordability. These new systems offer just about everything one could ask for in a powerful PC, delivering a great combination of features that are sure to please,” said Glenn Jystad, senior manager of consumer desktops, Gateway.

The GM5664 Desktop features the facility of watching Blu-Ray and HD-DVDs, TV tuner with remote control, 1TB hard drive, SmartCopy button for convenience in transferring data and a 400 watt power supply. The GM5664 is available with US retailers for $1,149.99.

On the other hand the GT5662 Desktop includes 500GB hard drive, SuperMulti drive to burn content on to DVDs or CDs and Labelflash technology. The GT5662 can be purchased at $749.99.