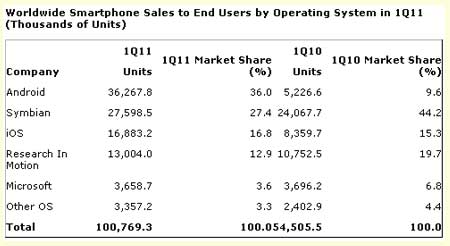 With regards to mobile OS, Nokia may have turned the tide by taking up Windows Phone and leaving others racing to plug in the mid-tier gap in an attempt to capture some of the market share. Apart from pointing out mobile communication device sales which touched 427.8 million in the first quarter of 2011, Gartner’s new report predicts a newly competitive mid-tier smartphone market will encourage mass adoption of such gadgets.

The aforesaid sales figures for the first quarter imply a 19% year-on-year growth as compared to the corresponding timeline in 2010. On the manufacturer front, Nokia slid down to an all time low since 1997 by facing a 5.5% decrease in market share. The company may have to watch its back when it comes to Android rivals as well as Japan-induced supply constraints in the light of the recent tsunami and earthquake. Clearing the shelves of Symbian phones while waiting for Windows Phone 7 devices is clearly going to be on top in the priority list.

“Smartphones accounted for 23.6% of overall sales in the first quarter of 2011, an increase of 85 percent year-on-year. This share could have been even higher, but manufacturers announced a number of high-profile devices during the first quarter of 2011 that would not ship until the second quarter of 2011. We believe some consumers delayed their purchases to wait for these models,” averred Roberta Cozza, principal research analyst at Gartner.

Samsung is touted to have enjoyed its strongest ever first quarter and the move to higher end handsets like those in the Galaxy series is getting a lot of credit for this. The company’s introduction of new tablets and smartphones and foraging into emerging markets with dual-SIM as also touch-enabled gadgets is only going to help improve performance as the year progresses. Meanwhile, Apple vended 16.9milllion units to end users on a global scale, more than doubling iPhone sales on a year-on-year basis.

“Every time a user downloads a native app to their smartphone or puts their data into a platform’s cloud service, they are committing to a particular ecosystem and reducing the chances of switching to a new platform. This is a clear advantage for the current stronger ecosystem owners Apple and Google. As well as putting their devices in the context of a broader ecosystem, manufacturers must start to see their smartphones as part of a computing continuum,” added Cozza.

Several manufacturers including HTC, Sony Ericsson, Alcatel and ZTE seem to have a wide range of mid-tier products, mainly Android-based, lined up for the second quarter. Android and iOS continued to float on top in the smatphone OS clashes. At 1.6 million units, Windows Phone could only claim to have achieved modest sales in 1Q11. When RIM transitions its BlackBerry portfolio to the QNX platform in 2012, we can probably anticipate devices flaunting improved graphics, performance and touch from the company.

Gartner analysts have also been stating what has been quite obvious for a long time now by saying that the shift toward an ecosystem focus renders application and services a vital success factor for OEMs. Those who need the nitty-gritties can look up the company’s ‘Market Share Analysis: Mobile Devices, Worldwide, 1Q11’ for more details.