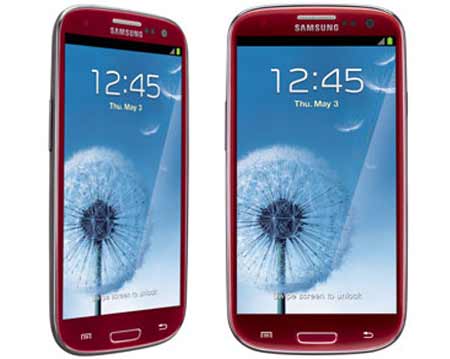 The AT&T Samsung Galaxy S3 splashed with the garnet red shade has finally been released by the South Korean-based manufacturer. This red colored smartphone will be available exclusively in the US through the carrier in question, reports the official AT&T Consumer blog.

AT&T is apparently the only carrier to stock up on the decked up version of the S3. While the pebble blue and marble white phones were released through this service provider on July 6, the new addition to the portfolio will not be made available before July 29. Pre-orders for the same will be accepted online and at retail stores from July 15 and interested users can pick up the device from company-owned stores from July 29. But, the carrier is yet to assign a product page to this latest entrant on its official website.

“As you may already know, AT&T will be carrying the Galaxy S III in an exclusive Garnet Red color. Beginning this Sunday, July 15, customers will be able to pre-order it at att.com/galaxysiii or at any AT&T company-owned retail store. You can also purchase it in any AT&T company-owned retail store beginning July 29. This fun, new color option combined with the nation’s largest 4G network make the Galaxy S III a great choice for AT&T customers,” stated Kari Tillman in a post on the official AT&T Consumer blog.

The red variant of the 4G LTE-enabled AT&T Samsung Galaxy S3 is likely to feature similar tech specs as its white and blue counterparts. It is powered by a 1.5GHz dual core Qualcomm Snapdragon processor as well as 2GB RAM and operates with the help of the Ice Cream Sandwich platform. The phone’s front panel dons a 4.8-inch Super AMOLED touchscreen display and a 1.9MP webcam, whereas the flip side is graced by an 8MP primary camera.

The 16GB garnet red AT&T Samsung Galaxy S3 price should be $199.99. And as mentioned above it is slated to start shipping from July 29.