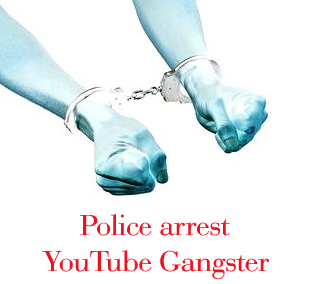 Tuesday night saw the Immigration and Customs Enforcement arrest two Miami gang members who were accused of taunting the police on a YouTube.com video.

The offenders Rudy Villanueva (pictured above, courtesy Miami-Dade County Police) and Anthony Logan featured in the video, which was removed from the website on Tuesday itself following the arrest.

In the video, Villanueva is shown holding an assault rifle and intimidating the police. He is shown saying, “Metro-Dade gang unit … here I am baby.”

Apparently as per investigation reports, a digital forensic truck has been used to examine the files from the two computers that were seized from Logan’s mother’s apartment. The investigators believe that these very systems were used to develop the video.

Following the above mentioned utterances, the duo spoke in a rather obscene way and ended the clip with a challenge to “come get it.”

It seems they have also held a number of firearms from the Logan home.

Apart from speaking aggressively against the police, the two also seem to be referring to a probable weapons violation since they are shown wielding a shotgun, handguns and an assault rifle.

Attorney Alberto Millian said, “He could be convicted of possession of a firearm by a convicted felon, which carries a sentence of 15 to 30 years in Florida State Prison.”