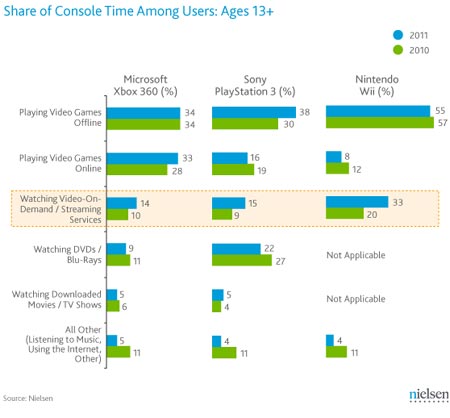 According to a recent report by Nielsen, video streaming on gaming consoles claim higher popularity as compared to last year.

As per this analysis, video-on-demand and streaming boasts of a larger share on the Nintendo Wii, Microsoft Xbox 360, as well as the Sony PS3 in the current year. Although the accumulative percentage of this rise has not been shown clearly, the report has revealed the figures on how much more time is being spent on these activities with respect to each gaming console.

According to the study, 14 percent of time on the Xbox 360 is expended on video downloads, as compared to 33 percent of Wii time and 15 percent of PS3 time. This growth is being largely attributed to easy access to services like MLB Network, ESPN3, NetFlix, Hulu, and others on these gaming consoles.

Another statistic highlighted by this report is that the time consumed by these devices on the whole has also increased in the first half of 2011 in contrast to the past year. There is a 7 percent collective rise in the total time enthusiasts spent on all three involved gadgets. Nielsen reports that this ascent in the overall period can also be traced back to the surplus time spent in video streaming.

In addition to this, the survey underlines the most significant attribute in terms of time consumption for each aforementioned console. Going by the results, 34 percent of Xbox time is spent in online gaming, while 55 percent of Wii usage is marked by offline gaming. The PS3 is marked out mostly for DVD and Blu-ray viewing, making up its 22 percent usage share.

This data was gathered from a survey conducted by the company in October 2011. The report was released by company as part of its third annual Nielsen 360° Gaming Report: U.S. Market which will be made available in 2012.