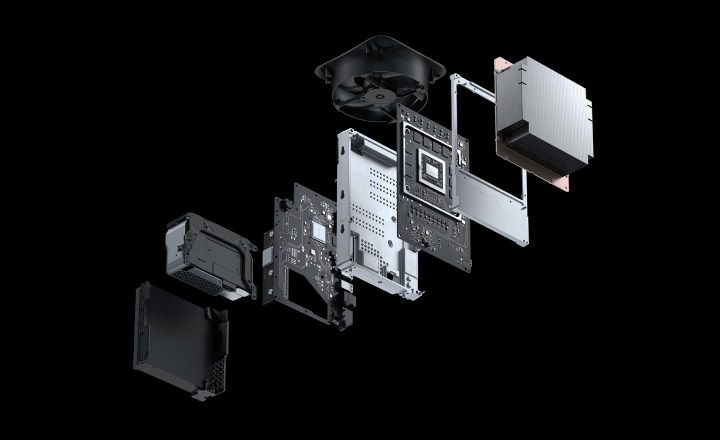 After hilariously assuring us that its upcoming Xbox Series X console is not as tall as a refrigerator (it’s in fact a foot in height), Microsoft has laid bare all its specifications, and boy are they impressive. It’s no surprise that the next-gen beast will ship with a SSD, but what’s really worth noting is that there’s support for removable storage, allowing you to add more space when required.

Speaking about the core specifications, they include a custom AMD Zen 2 CPU bearing a set of 8 cores, each clocked at a whopping 3.8GHz each. This setup is derived from a 7nm process, and so is the custom AMD RDNA 2 GPU of the Xbox Series X, which offers 12 teraflops and 52 compute units clocked at 1.825GHz each. The standard model will come with a 1TB NVME SSD.

As far as RAM goes, 16GB is the amount provided in GDDR6 form, but not all of it will be accessible to developers for their games. 2.5GB has been reserved for the custom operating system, while 3.5GB is meant for standard memory. That leaves 10GB for fast GPU optimal memory. All this hardware has been aimed towards offering both 8K 120fps performance as well as quick load times. In fact, Microsoft has also released a comparison between the load times of the Xbox One X and the Series X in the form of video you can watch in the space below.

As expected hardware accelerated Raytracing will indeed form part of the Xbox Series X’s offerings. This will allow it to offer realistic lighting effects with a glaring difference. As for the controller, while is hasn’t been showcased yet, we’ve been told that it’s USB-C, uses AA batteries and supports Bluetooth LE.

The Xbox Series X is primed to be released later this year, so expect some major game announcements for the next-gen machine in the months to come.