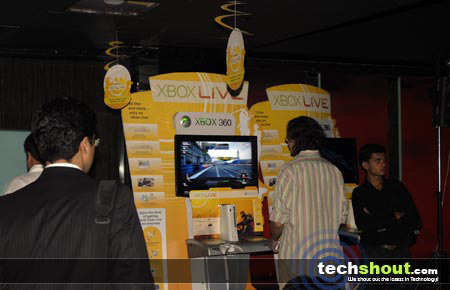 On the night of November 22, Microsoft Xbox 360 and Games for Windows hosted India’s very first Gamers’ Night in the popular suburban night club Squeeze. This do was organized in an effort to build a gamers’ community across India.

Seen mingling with each other were members of the press as well as a few lucky and rather anxious gamers. Well, that’s not the only thing they came here for. Several unreleased games that have not yet hit shelves in India were set up for gamers to lay their hands and eyes on.
The main attraction of the night was obviously Mass Effect, the action role playing game. The night club was transformed into a gamer’s paradise with a huge screen dedicated exclusively to those who wished to try out Mass Effect.

Other games that were set up included PGR4, NFS Prostreet, The Simpsons, the Orange Box, Skate, Gears of War for PC and Army of Two.

However, since we were made to sign an a non-disclosure agreement, we won’t be telling you anything about the games until they actually release.

“We have a diverse portfolio of gamers across genres that appeal to all- fast paced action games to racing games to light-hearted games that everyone can enjoy,” said Vivek Kulkarni, Product Marketing Manager, Xbox 360 & Games for Windows.

According to Mohit Anand, Country Manager, Microsoft Entertainment & devices Division, “Committed to the Indian market, our efforts are aimed at initiating and building a gamers’ community across India. We are here to promote gaming as an exciting genre of entertainment for family and friends. And Xbox 360 gives them just that- wholesome entertainment that people can enjoy as a community.” 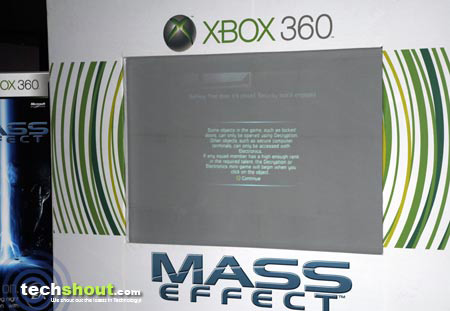 Due to the NDA we are not allowed to talk about EA’s yet unreleased games. However, all we can say is that The Simpsons Game was loads of fun, while Mass Effect was quite engaging.

Gears of War for the PC was just fabulous as we did not expect the graphics to be that great after playing the Xbox 360 version. On the contrary, the graphics were super as apparently, the PC version runs on NVIDIA’s 8800GTX chipset.

Mass Effect amongst many other games were available for purchase. And, those who purchased the Mass Effect game also got a free limited edition poster of Master Chief signed by Joseph Tung and Chris Carnet of Bungie Studios.

All in all, the very first Xbox 360 Gamers’ Night turned out to be a whole lot of fun. You can expect more event such as this in the future, as Microsoft is committed to the development of the gaming industry in India.