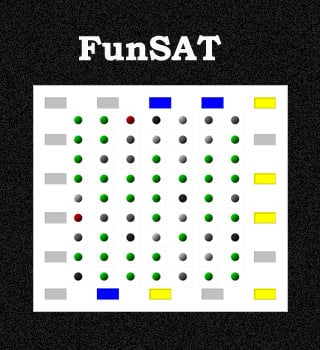 The things technology can do! Well, we may be awed by the latest mobile phones, laptops and a host of other devices that catch our attention each day. Computer Science researchers at the University of Michigan seemed to have been really busy developing a new computer game prototype called FunSAT and it’s not as plain as it sounds. The interesting game combines work and play to aid in solving a basic problem getting the better of many computer hardware design tasks.

The fun online logic puzzle, researchers claim has the potential to aid integrated circuit designers choose and put in order transistors along with their connections on silicon microchips. And this, they suggest is just one among many of the game’s other applications.

FunSAT claims to marks its presence in designing the chip architecture. A tedious task, computers simply flip through possible arrangements in their search for the best possible chip. This is mainly because they lack human abilities of intuition and visual pattern recognition allowing better creation or even optimal design for chips. With the novel game, researchers are hopeful to harness humans’ abilities to strategize, visualize and understand complex systems.

“Computer games can be more than a fun diversion,” shared Valeria Bertacco, an associate professor in computer science and engineering. “Humans are good at playing games and they enjoy dedicating time to it. We hope that we can use their strengths to improve chip designs, databases and even robotics.”

Presently a single-player prototype exists that has been implemented in Java by U-M undergraduate Erica Christensen. Working on growing it to a multi-player game, Bertacco along with colleague Andrew DeOrio hopes to take care of complicated problem solving through this game. Players in the meanwhile can solve challenging problems on the FunSAT board to contribute to the design of complex computer systems. Besides, the game requires no real geeky mind as such and claims to be a kind of puzzle that would excite Sudoku fans.

The game incorporates a board that includes rows and columns of green, red and gray bubbles in various sizes. With the click of a mouse players can turn buttons that are located around the perimeter yellow or blue. The color of the buttons ascertains the color of bubbles on the board and the goal of the game is to use the perimeter buttons so that they toggle all the bubbles green.

Players also get a hint of what to do next by simply right-clicking on a bubble that tells the buttons that control its color. The number of buttons controlling the bubble depends on its size so the larger a bubble is the more buttons control it. With each button affecting many bubbles simultaneously in different ways, the game could get challenging. Gamers will also observe that a button that turns several bubbles green will also turn others from green to red or gray.

Unearthing the so-called satisfiability problems, the game will manage classic and highly complicated mathematical questions. In quandaries that involve selecting the best arrangement of options, the game will help the solver to assign a set of variables to the right true or false categories. This will assist in fulfilling all the constraints of the problem with the bubbles representing constraints. When they are satiated, they become green. The variables are represented by the perimeter buttons and are assigned to true or false when players click the mouse to make them yellow (true) or blue (false).

“When solving these problems, humans can use their intuition and visualization skills. For instance, by just glancing at the neighborhood map they can gain an intuition of where to begin in the case of the postal route,” Bertacco said. “FunSAT can leverage these human skills that computer-based solvers do not have.”

All a computer scientist was required to do was look at the color of each button to gather the solution of that particular problem. This is done once the puzzle is solved and all the bubbles are green. This, researchers say could assist in solving satisfiability problems occurring in instances other than complex chip design. This includes packing a backpack with maximum number of items as possible, searching for the shortest postal route to deliver mail in a neighborhood and more.

A paper on the research called ‘Human Computing for EDA’ was expected to be presented at the Design Automation Conference in San Francisco.