Galaxy Note 4 hits India on October 10, release dates for other nations out too

The Samsung Galaxy Note 4 is one of the most awaited smartphones at the moment, and its makers have just soothed the hearts of millions who are waiting to buy it, by announcing its launch plans for the device. An infographic on the company’s Facebook page has revealed that it will be arriving in India on October 10.

The large phablet is most certainly being brought into the country first in order to cash in on the festive season rush that’s about to ensue here. What’s more, Apple’s dilly-dallying about whether or not to launch the iPhone 6 range in India before Diwali will mean an obvious advantage for Samsung’s latest Note flagship. 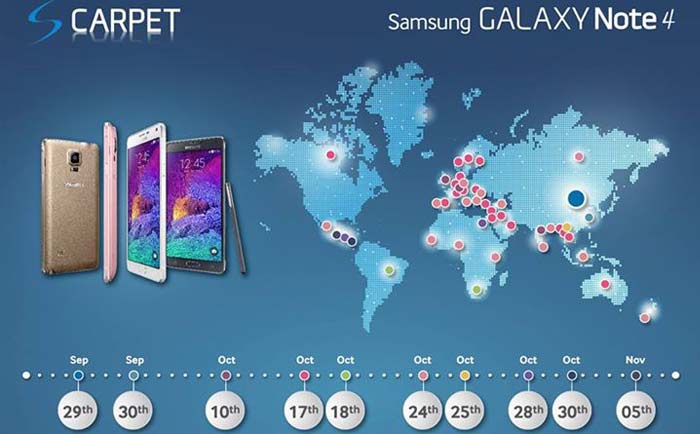 October 10 will also see the device being released in the UK and Germany, whereas its arrival in Europe, North America, the Middle East, Australia and Asia has been marked down for October 17. This release phase will continue until November 5 when it will make its way into Central America.

Also Read: Samsung seemingly in a rush to bring Android L to Galaxy S5 and Note 4

Equipped with an even more advanced S Pen, the Galaxy Note 4 offers a 2K resolution totting 5.7-inch Super AMOLED screen. While one of its models is powered by quad core Qualcomm Snapdragon 805 SoC, the other one has been blessed with an octa core Exynos 5433 chipset.

Here’s a complete look at the specs of the Samsung Galaxy Note 4:

With India having been chosen to be one of the first countries to get the Samsung Galaxy Note 4, it’s certain that the company is expecting huge returns from its fans here. Let’s see how things go for this attractive phablet in the nation once it’s out on October 10. Its pricing will be revealed closer to launch.

Facebook
Twitter
Pinterest
Linkedin
ReddIt
Tumblr
Flip
Previous articleAlcatel Onetouch Fire C wants to cash in on Firefox OS’ growing popularity in India
Next articleNexus 6 comes out of the shadows for a bit, gets photographed in the wild