From applications and games to music and movies, the Google Play store now even sells mobile phones with the Samsung Galaxy Nexus being the first participant for the US. The device in question will be available unlocked and contract-free for a price of $399.

The pure Google smartphone is said to ship with 3G and 4G HSPA+ network support on-board. And since users won’t have to worry about carrier commitments, the device should be fully functional on a wide catalog of operators worldwide, including AT&T and T-Mobile in the US. The handset will not only pack in the ICS OS, but also a number of features along with the Google Wallet app pre-installed. The company is even throwing in a $10 credit.

Andy Rubin, Senior Vice President of Mobile and Digital Content, commented, “We started shipping Nexus phones more than two years ago to give you a pure Google experience and access to the latest Android updates. Today, we’ve started selling Galaxy Nexus (HSPA+) from a new Devices section in the Google Play web store, so you can quickly and easily purchase an unlocked version of the phone. We want to give you a place to purchase Nexus devices that work really well with your digital entertainment.” 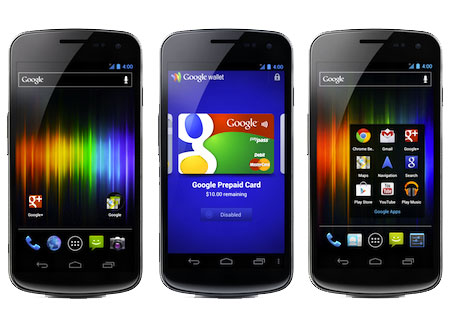 According to the official Google blog, new customer support services are in the works to deliver an enriched purchasing experience. And in addition to the aforementioned attributes, the smartphone will come equipped with a 4.65-inch HD 720p Super AMOLED Contour display, 16GB of internal storage, 1GB of RAM, a 1.2GHz dual core processor and a 5MP AF camera. All components are fitted within dimensions of 135.5mm x 67.94mm x 8.94mm.

As we’ve previously noted, the Samsung Galaxy Nexus price amounts to $399 and it’s now available for purchase through Google Play in the US.