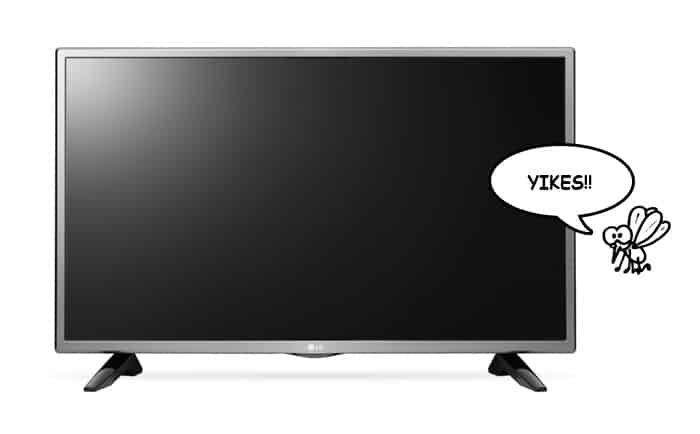 Wouldn’t you like to eat buckets of fries without needing an angioplasty, have someone pay you to take long naps at work and drive mosquitoes away by doing something as unrelated as buying a TV? Well, you can do the last mentioned, if you’re willing to splash out on an LG Mosquito Away TV. And it doesn’t even need to be switched on to repel those bloodsuckers.

The price of the 31.5-inch mosquito-repelling LG TV in question is Rs 26900, while the 42.5-inch costs Rs 47500. The tech used in it is odorless and invisible, and might only be noticeable as a sort of low-level buzz from the speakers. It basically consists of a small Ultra Sonic device which emits sound waves that confuse mosquitoes.

We don’t know why LG isn’t selling the Mosquito Away component as a standalone gadget. The company claims its technology has been tested by the International Institute of Biotechnology and Toxicology (IIBAT) in India, Intertek and other institutes worldwide. Do note, it has posted a disclaimer saying the long-term effects of the feature haven’t been tested.

What LG means is that the mosquitoes in your neighborhood could become tolerant to the sound waves. Additionally, the species used while testing the system might be different from the ones in your region. The Mosquito Away TV is for managing the pests, and not a replacement for other protective options such as a mosquito net, bug-repellent cream, coil and so on.

We like the idea, though we could do better with a Mosquito Away PC monitor since we’re glued to our computers most of the time. Coming back to the TV, it will be out at select LG Brand stores across India soon. The company’s split ACs featuring the same technology, has been available in the country for quite some time now.

As mentioned above, the starting rate of the LG Mosquito Away TV is Rs 26900.