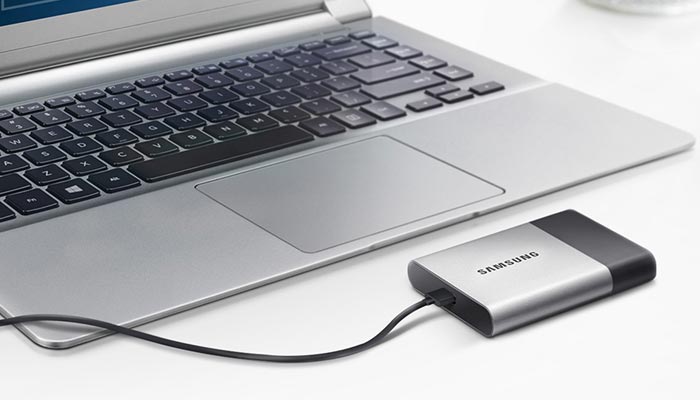 The Samsung SSD T3 has arrived in India, a few months after it was first seen at CES 2016. The tiny palm-sized external drive is set to hit shelves on March 21 in physical stores across the nation, in addition to online outlets Amazon, Snapdeal and Flipkart.

The portability of the Samsung SSD T3 is one of its strongest features, weighing in at only 51g. Adding to its appeal is its ability to read and write data at speeds of up to 450MB/s thanks to the brand’s TurboWrite technology and support for USB 3.1 Type C connectivity. The company claims the device is 4 times faster than external HDDs.

Samsung has carved the gadget out of metal and coated it with anti-scratch urethane. The firm says it features no moving parts, meaning data won’t get lost or corrupted because of daily wear and tear. It’s further enhanced the device’s durability by equipping it with a shock resistant internal frame which can take on a maximum of 1500G and even survive a 2m high drop test.

There’s also a thermal guard to stop the SSD T3 from overheating. As for security matters, the device ships with AES 256-bit hardware encryption. Users will further be able to set a password to prevent unauthorized access. A Samsung Portable SSD Android app helps them with password changes and keeps track of the drive’s remaining capacity.

The Samsung SSD T3 could prove to be especially useful for people in fields such as media which require large amounts of data storage and quick transfer speeds. The range doesn’t come cheap, with the 250GB option coming in at a hefty Rs 10999, the 500GB for Rs 18999, the 1TB for Rs 37999, and the 2TB priced at a whopping Rs 74999.