We were expecting a Chromecast refresh this year, but we weren’t prepared for a full-fledged design overhaul like the one we’re seeing its leaked pictures. As you can see in the images, the new iteration of the streaming accessory could adopt a balloon-like form factor.

The report that has outed the second-gen Chromecast has also said that Google will be equipping it with a number of useful upgrades. Among them will be support for the Wi-Fi 802.11ac band, that should translate into faster streaming of content from devices.

Google will also be offering a special ‘Fast Play’ feature along with this dongle. This trait will supposedly enable the gadget to connect more quickly to a TV. It will indeed be a welcome relief, as the current-gen model takes quite some time to establish a connection to an HDTV. 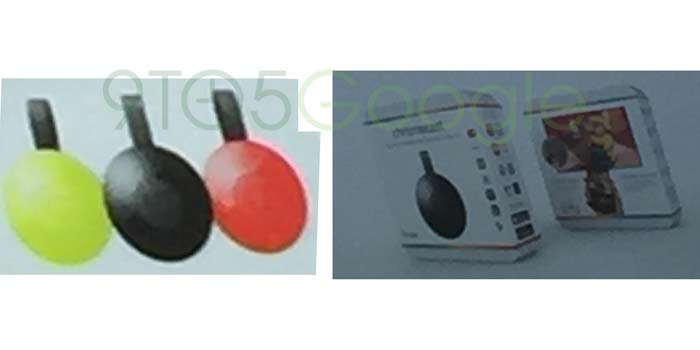 The new Chromecast will also ship with the facility to directly plug into a speaker using an auxiliary cord. This will allow users to take advantage of their multi-room speaker setup, and even enable them to mirror the audio playing on a Chrome browser or an Android device.

The source of this information, 9to5Google has cited internal documents in its presence to reveal that the Mountain View company will be unveiling the new Chromecast on September 29. That’s also the date on which we’ll be getting to see the two Nexus smartphones made by LG and Huawei, details about which have been leaking like crazy over the past few weeks.

So interested parties can stay tuned until September 29 to know more about the new Google Chromecast, including its all-important price.

5 Useful Gadgets Up To €46 For a Present