Back in 1991, Sennheiser had released what it called the best headphones in the world, the Orpheus HE90. The electrostatic device cost $16000 and had a limited run of just 300 units. The company has now announced a successor to its throne and driven the price up to €50000 (approx $55000).

The new Orpheus headphones have apparently been 10 years in the making. Production will start in 2016 with Sennheiser committing to produce at least 250 units of them a year. The gadget is made up of 6000 different components including gold-vaporized ceramic electrodes and a spring-loaded Italian marble housing which stops any noise from occurring within the structure.

The Sennheiser headphones are attached to vacuum tubes and are apparently the 1st electrostatic headphone with a Cool Class A MOS-FET high voltage amplifier directly molded into the leather ear cups. This sets it apart from ordinary accessories, as it is able to deliver an ultra-high sound fidelity 200% more efficient than others at an ultra-low distortion level. 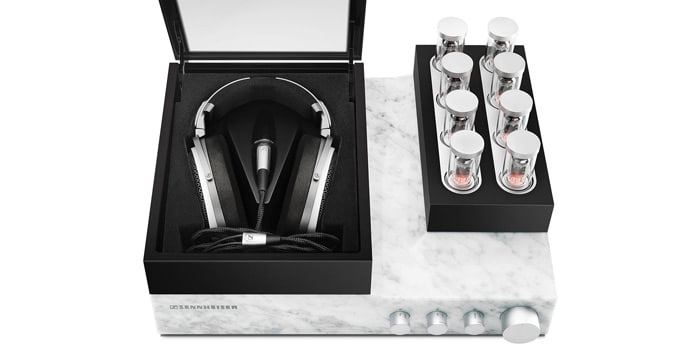 Sennheiser claims the luxury gadget carries a frequency response ranging from 8 Hz to more than 100 kHz, way beyond what humans are able to hear. Going deeper into its specs, it produces a sample rate of 384KHz and outputs a distortion of 0.01% at 1KHz and 100dB of sound pressure level. The figure is supposedly the lowest ever measured by an audio reproduction system.

This noise reduction is made possible with the help of oxygen-free cables plated with silver. Sennheiser has additionally equipped the Orpheus headphones with an ESS SABRE ES9018 chip which utilizes 8 DACs to offer sound with a resolution of 32 bits. The product’s control dials only emerge when the unit is switched on and are made out of a single piece of brass.