Calling out to all indecently rich Super Mario fans out there who wouldn’t think twice before dropping $18,950 on luxury watchmaker Romain Jerome’s latest. Talk about putting a price on nostalgia. Designed to celebrate the beloved Nintendo game’s 30th anniversary, this Super Mario Bros. mechanical timepiece will be part of a limited edition collection.

Only 85 such watches are being made available in honor of the launch of Super Mario in 1985 (hence 85 pieces). The case is built out of black titanium and is 45 millimeters. The face of the timepiece is where the real design can be seen. The three-layer dial shows off a 3D effect, with enamel-coated figurines decorating it. The figures of Mario, a mushroom, a cloud and a bush harking back to the 8-bit era are present here. 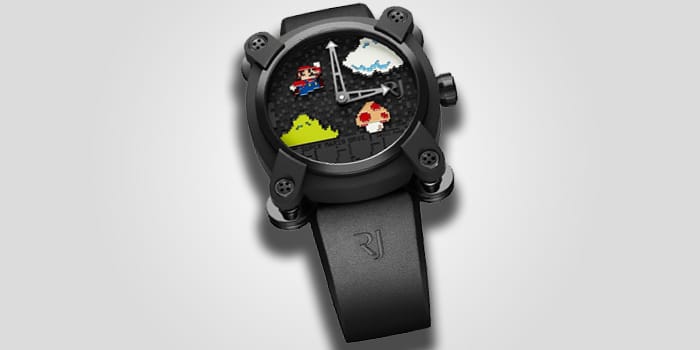 The Romain Jerome branding can be seen on the watch strap which carries a simple inscription saying RJ. The designer has also created timepieces inspired by other iconic video games in the past. Some of our favorites on the wishlist are the ones inspired by Space Invaders, Pac-Man and Tetris. Of course, those were limited edition watches just like this Super Mario variant.

Head over to the official site, if you want to take a look at all of them.