TechShout
Home Gadgets Alcatel’s unique OneTouch Watch to have a circular face and an affordable...

Ahead of its CES 2015 arrival, Alcatel has given us a glimpse of its OneTouch Watch which it will be bringing to the expo. It does not run the Android Wear operating system, but will indeed to be able to hook up with Android smartphones and tablets via Bluetooth most probably.

One of the main highlights of the Alcatel OneTouch Watch happens to be the fact that it houses a circular display, much like the one we’ve seen on the Moto 360 or the one which the new LG G Watch R sports. A variety of different straps will be available for it, judging by the image that the company has released. 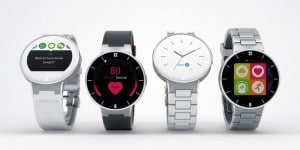 Specific details about this device will only be revealed during CES, but Alcatel has indeed told us what you can expect from it. Firstly, it will be marketed as an affordable product which means developing markets like India will be its main targets.

Like all smartwatches, the OneTouch Watch too will come equipped with a variety of sensors and apps for tracking the activities of its users. Most importantly though, it will showcase the notifications received on connected devices right on its own screen, so that you don’t have to take them out of your pockets to view them.

Furthermore, this Alcatel gadget will even allow you to perform tasks like controlling music, clicking photos of your smartphones and more. It’ll hence be interesting to see how exactly the company has shaped this device up.

CES 2015 is just a few days away from now, so you won’t have to wait till long in order to have your first glimpse of the Alcatel OneTouch Watch.