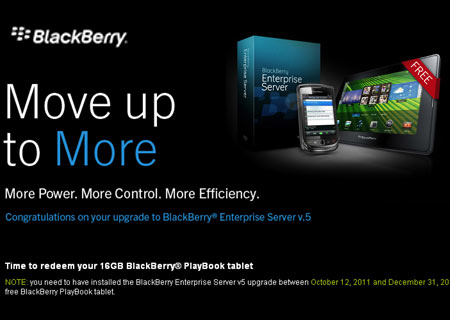 If the $199 limited time sale wasn’t enough for RIM to clear out its stock of tablets, then the free BlackBerry PlayBook deal for business customers might just help pick up the pace. On purchasing or upgrading to the BlackBerry Enterprise Server v5.0, users are entitled to a free device which can be redeemed from the BlackBerry Move up to More website.

The new promotion tactic does come with a few conditions of its own. According to the official BlackBerry blog, the company will give out a free 16GB variant of the BlackBerry PlayBook to all BlackBerry Enterprise Server v5.0 purchases only if they’re made before the end of 2011. Previously, the slate received a price drop which brought its initial cost to $199 for a limited time-frame. The offer is currently available through participating retailers namely, Best Buy, Wireless Giant, Office Depot, RadioShack, Walmart and ShopBlackBerry stores. 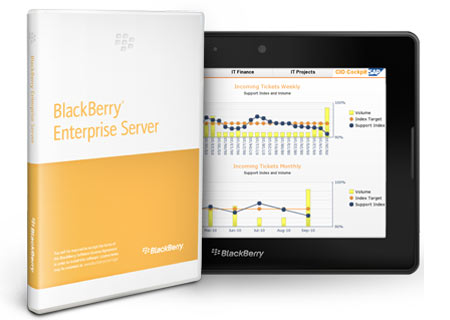 v5.0 of the software package is stated to benefit IT administrators through a number of offerings such as a reworked administrative console for advanced mobile management, the BlackBerry Enterprise Transport Tool and many more. Well, that wasn’t all. End-users can also benefit through the latest upgrade with features like remote file access, email folder management, ability to play WMA files, better calendar functionality and various others that help enhance the overall productivity.