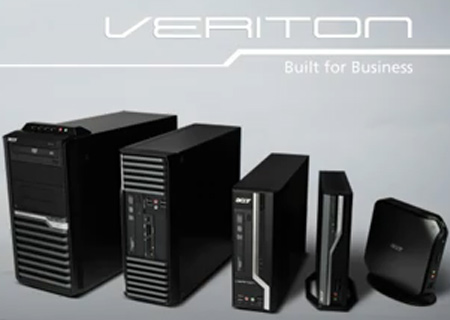 Both series will be the first Acer commercial products to come loaded with the company’s Proshield Management and Security software. The utility accommodates an encrypted hidden drive for confidential personal files, a BIOS import and export tool for simplified system management and a file shredder that irreversibly erases sensitive data from the system.

“Our newest range of Veriton 4610 and 6610 series’ desktops has been engineered with reliability in mind, without compromising on technology. Our intuitive cable management and tool-less design delivers consistent performance throughout the life of this user-friendly product,” trilled Harry Boyadjian, Acer’s Product Manager for Commercial Desktop.

The 4610 and 6610 lineups include Intel Core i processors, Intel HD Graphics 2000 with up to 1.6GB shared graphics memory, support for around 2TB of storage and Acer’s Veriton Control Centre Suite. The last is a tool which lets users customize the way in which the PC runs and even save up to 24% system power consumption with the Acer PowerSaver program.

The 6610 series is outfitted with the Intel vPro remote system management feature and Intel’s Stable Image Platform Program for reducing the Standard Operating Environment development time. A sophisticated matte black design with silver and black vents is part of the exterior theme which runs common in both ranges.

The Acer Veriton 4610 series is set to hit Australia and New Zealand on March 1. The tags will read at around $935 in the former region and approximately $1239 in the latter. The pricing and availability of the Veriton 6610 series haven’t been mentioned.