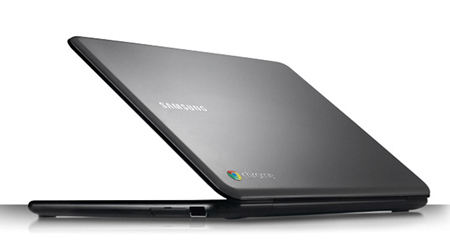 Revolving around speed, simplicity and security, Samsung has dished out the first Chromebook for the European market. The stylish Samsung Series 5 Chromebook is all set to go globetrotting starting June 24.

Slim at 0.79-inch and weighing 1.48kgs, the device shows off a simple user interface. It has been optimized for a swift performance and adorns an ergonomic body. The keyboard comes with a dedicated Search key and also a new row of web-enabled keys.

Dinesh Chand, Head of Mobile Computing Europe, Samsung, said: “The idea of the Chromebook is revolutionary – it’s about expanding people’s perception of computing. Many people today are living web-centric lifestyles – they’re online at home, on the move and at work. Rather than start with an existing notebook model and adapt it for the web, we’ve designed this from scratch to meet the needs of those people specifically.”

Promising a start-up time of less than ten seconds, the Chromebook offers protection against threat of malware and viruses. With a battery life of up to 8.5 hours and a lifespan of up to 1,000 cycles, it is fueled by Intel Dual-core processor. The 12.1-inch Super Bright display is anti-reflective as well as anti-glare. It comes with support for 3G (optional SKU), WLAN and 4-in-1 card reader.

The Samsung Series 5 Chromebook will hit stores in the UK, France, Germany, Netherlands, Spain and Italy beginning June 24. The Wi-Fi model has been priced at €399 (£349 in the UK) while the 3G enabled device attaches a price tag of €449 (£399 in the UK). The device is expected to be made available in other countries over the next few months.