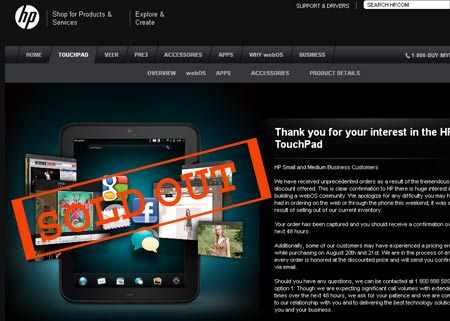 What are the things people will politely ignore when they buy a tablet like the HP TouchPad at $99? Apparently, a lot of important things. We can start with the fact that HP has decided to walk away from webOS device operations and will explore ‘strategic alternatives for webOS software’. But the slate seems to have been selling like hot stuff anyway, considering that Amazon has listed both the 16GB and 32GB versions in their list of best sellers and Best Buy appears to be sold out online at present.

It’s amazing how the HP TouchPad managed to become what can safely be called one of the most sought after tablets in town in the light of such news which indicates that HP won’t try hard to sustain the supporting app ecosystem. It all boils down to the question – Why would developers want to create apps for a dying platform? So users can hardly expect to shop for interesting apps in a virtual marketplace bearing even the slightest resemblance to iTunes or Android Market. And Apple has played this game so well, a tablet or smartphone without a choice of downloadable content just does not look good enough.

But people will probably be discovering a lot of uses for the TouchPad. Best Buy was selling the 16GB HP TouchPad at $99.99, while the 32GB variant was being vended for $149.99. As we said earlier, both versions are now sold out online. The price tags are far below the original $499.99 and $599.99 labels. The list price for the 32GB tablet was cited at $149.99 and that for the 16GB slate marked at $100 on Amazon. These seem to have been snapped up quickly and they’re currently being offered by resellers for anything upwards from $279.95 and $299.99, respectively, on the Amazon site.

Meanwhile, those trying to buy one through the HP website will end up somewhere here, ‘We apologize for any difficulty you may have had in ordering on the web or through the phone this weekend; it was as a result of selling out of our current inventory. Additionally, some of our customers may have experienced a pricing error while purchasing on August 20th and 21st. We are in the process of ensuring every order is honored at the discounted price and will send you confirmation via e-mail.’

Does this imply inexpensive tablets are in high demand? Or that people will buy anything sold at a crazy discount as long as it’s from a well known manufacturer? It doesn’t matter to the HP TouchPad. It’s more famous than it’s ever been. And it can now compete for the highest honors as a product which was pulled out of stores in record time. Is anyone looking at why the tablet didn’t do all that well in the first place? Not right now. They’re busy looking for the cheapest bargain on the TouchPad.