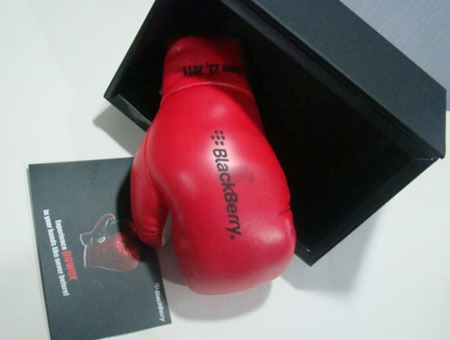 Who’d have thought that RIM was going to issue a unique invite to the BlackBerry PlayBook unveiling in India? We received a curious package the week before that fateful press event RIM pulled together in Mumbai yesterday. A black carton bundling in a sole left hand boxing glove surprised us out of our socks. Now we’re not in the habit of stepping on people’s toes on purpose, so this didn’t look like a subtle intimidation about anything.

Honestly, LetsBuy announcing pre-sales of the BlackBerry PlayBook a few days before it broke out was not the cue for guessing the product to be unleashed at the said event. What else would anyone expect when the boxing glove was sitting on an invite reading ‘Experience power in your hands like never before!’? For one thing, RIM appears uncertain about displaying too much enthusiasm about any BlackBerry phone when a transition to QNX is on the cards. 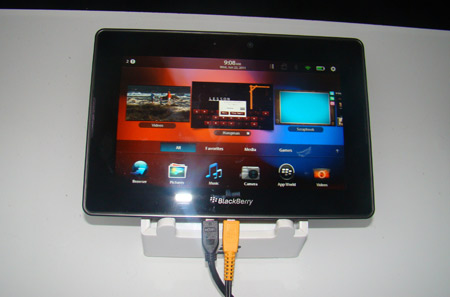 “The BlackBerry PlayBook is an incredibly powerful and innovative product in the growing tablet marketplace. It’s perfect for both large organizations and individuals, and it give users an unmatched mobile experience. With the BlackBerry PlayBook we are stepping into a new ear of mobile computing and opening ip new and even more exciting opportunities for developers and content publishers with support for Adobe Flash, Adboe Mobile AIR and HTML5,” cited Frenny Bawa, MD, India – RIM. 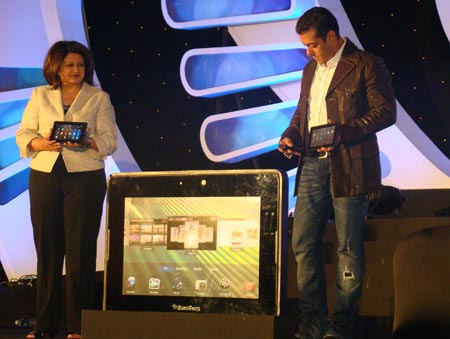 So RIM did indeed usher in their modest-sized slate amidst the literal fireworks. Sipping off the new BlackBerry Tablet OS and a 1GHz dual core processor, this device shows a 7” 1,024 x 600p capacitive touchscreen on the front. It goes as deep as 0.4” and weighs 0.9lbs. Some of the other major specs cover 1GB RAM, Bluetooth v2.1 + EDR, Wi-Fi 802.11a/b/g/n and HDMI connectivity. The tablet also comes with a 5MP rear camera, a 3MP one on the face and a bunch of pre-loaded apps.