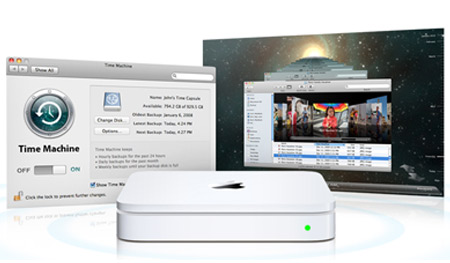 It’s been a good long time since we’ve heard of anything other than Mac and iDevices from Apple’s end. While the rumors about a new iPhone iteration are doing the rounds, the tech giant has sneaked in to extend something that almost everyone Mac user would crave for. Refurbishing its automatic wireless backup device for Mac, the Apple Time Capsule has been dished out in a 3TB flavor.

Unveiled to complement the Time Machine for Mac systems, the latest version of this storage solution houses a 3TB hard drive. It has also been referred to as a full-featured AirPort Extreme Base Station. Equipped with 802.11n technology, it delivers a high-speed wireless network which connects all Mac computer’s on a given network. What’s more, it can be employed with Time Machine in Mac OS X Leopard as well as Mac Os X Tiger, Windows XP and Windows Vista.

The Apple Time Capsule is available at a starting price of $299.99. Buyers will need to shell out $499.99 for grabbing the 3TB version of the storage device.