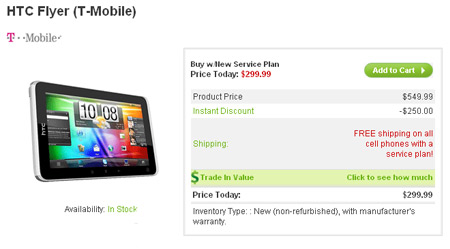 The HTC Flyer tablet is out through T-Mobile, never mind that other carriers have already been offering it for a few months now. Powered by the Android Gingerbread OS, the device will be available to existing users as well as those who sign up for a new contract.

And here’s a little refresher – the Flyer tablet comes with a 7-inch 1024 x 600p TFT capacitive touchscreen and is powered by a 1.5GHz Qualcomm processor that’s backed by 1GB of RAM. Packed with the HTC Sense interface, the device embeds dual cameras, one rear-facing 5MP and a second front-facing 1.3MP for video chatting.

The device is also optimized to be used with a stylus. However, the HTC Scribe Pen will not come bundled with the tablet, but can be purchased separately. Also, with the 4000mAh Li-ion battery, users will receive standby time of up to 1,470 hours. It reads at dimensions of 7.6 inches x 4.8 inches x 0.5 inches and operates on the company’s 3G HSPA network.

Where connectivity is concerned, the tablet is equipped with Wi-Fi IEEE 802.11b/g/n standards, Bluetooth 3.0 with A2DP for wireless stereo headsets, on-board GPS, a 3.5 mm stereo audio jack and a standard 12-pin microUSB port. Entertainment-wise playback support for video formats cover 3GP, 3g2, MP4, WMV, AVI and XVID, whereas for audio, the device comes with AAC, AMR, OGG, M4A, MID, WAV and WMA support. It sports 16GB of internal memory that is expandable up to an additional 32GB through the microSD slot.

The HTC Flyer price from T-Mobile in the U.S. amounts to $299.99 with a new service plan. Those who want to upgrade an existing plan can look forward to dropping $454.99 for the slate.