TechShout
Home Gadgets International launch of iPad delayed until May 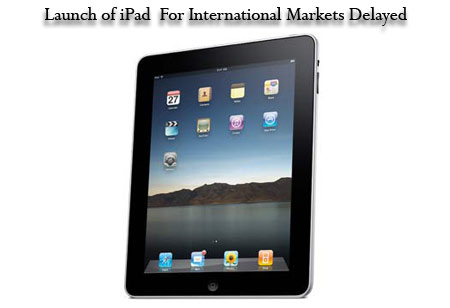 Over-hyped or just having a penchant to stay in the news is something we’ve seen with earlier Apple products too. And Apple’s iPad is no different as it seems to love the limelight.

Those who have been longing to grab their iPad will just have to wait longer. Yes, an Apple media advisory revealed that the iPad won’t hit shelves until the end of May 2010 due to higher demand.

Disappointingly Apple fans will have to wait for one more month until the device makes its international debut. The company however shares that it would be announcing the international pricing even if those outside the U.S. won’t really be able to get hold of their device.

Claiming to have delivered over 500,000 iPads in its first week itself, the company has also taken a large number of pre-orders for the 3G models of the gizmo. The iPad 3G models are slated for delivery by the end of this month.
Starting, Monday, May 10, the company will be making public the international pricing of the device while also commencing online pre-orders.