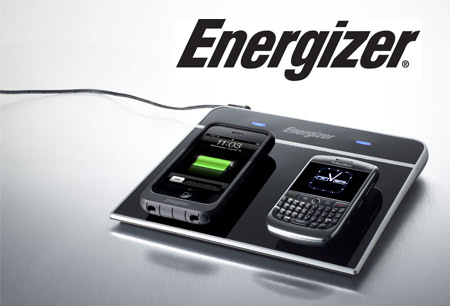 The need to stay connected while always on the move only makes it necessary that we’re armed with devices capable of handling more than a day’s task. We saw Sanyo show off a few chargers this week doing just that and Energizer’s latest offerings say the company doesn’t want to be left behind either. The latter recently slid the covers off a new inductive charger to suffice wireless power needs. It’s said to be one of the first devices to incorporate the universal Qi technology.

The charger’s integrated Qi technology is a new universal charging standard built by the Wireless Power Consortium (WPC). It is believed to be one of the most compelling developments in charging technology thanks to flexible charging abilities. Any device ranging from smartphones and MP3 players to cameras, 5W or less can be hooked onto a single charging station with this technology.

“We believe that a universal standard is the future of charging, and by leading the way with one of the first Qi products – the Energizer® Inductive Charger – we are meeting a clear need for a product that makes charging devices easier by eliminating cords and clutter,” commented Jim Olsen, Vice President of Marketing for Energizer North America. “This next generation charger is a natural extension of an innovative product portfolio that brings more freedom for people to live and to work using power that’s reliable and convenient.”

“The WPC and dedicated members like Energizer have been hard at work developing and testing this universal standard, and we are honored to have a brand with the global reach of Energizer as one of the first to market with a Qi inductive charger,” adds Menno Treffers, Chairman of the Wireless Power Consortium. “They are helping to establish and educate about Qi and drive adoption, benefiting consumers and the industry as a whole.”

The first generation of the Energizer inductive charger is tailored for effortless charging of up to three devices simultaneously with cooperation from WPC co-founder ConvenientPower. It boasts of two large inductive charging zones that don’t require users to lock the device into a correct position. Users simply need to lay down their phone for effective charging. The included USB port also allows easy charging of an additional device. The charging device is indicated by two LED lights.

Gearing up for retail this October, the charger carries a suggested retail price of $89. Accessorized with a removable Qi Sleeve for the iPhone 3GS/3G, the Energizer inductive charger also comes with a one-time replacement Qi Door for the BlackBerry Curve 8900. Both accompaniments can be picked up separately for $34.99 each.