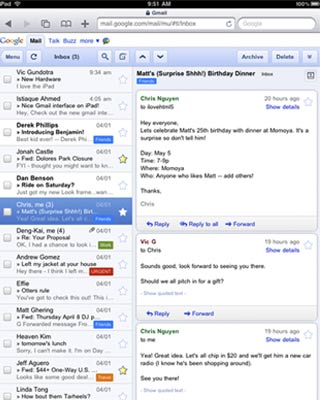 The number of users accessing Internet via mobile devices has been rapidly increasing, from mobile phones to handheld devices and now Apple’s latest innovation, the iPad. Well, the release of iPad has brought in a wave of offerings for the dainty device including the recent release of Gmail.

According to the Official Gmail Blog, Google has launched an experimental two-pane user interface to reap the benefits of the large touchscreen and tablet form factor. Reportedly, it builds upon the Gmail for mobile web app. The interface displays the user’s conversations on the left while the messages take the right seat.

The Blog also reveals, “All the features of the Gmail web app that you’re used to, such as offline access and aggressive caching to reduce latency, are present in the iPad version. Tablet devices are still very new, so expect changes as we continue to optimize for this new format. We’d like to hear any ideas you may have on how we can make Gmail better for the iPad so don’t hesitate to let us know via the ‘Send feedback’ link at the bottom of your inbox on iPad.”

Users wanting to try Gmail on iPad can simply go to gmail.com in Safari. However, it is now available only in US English.