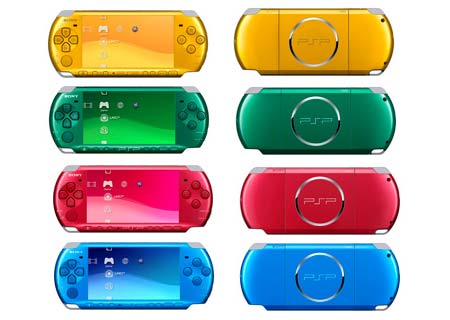 Dubbed as the Carnival Colors collection, the PSPs will be available in the country on March 19th, 2009 for a recommended retail price (RRP) of 19,800 yen including tax. With this, Sony is also releasing a “PSP Carnival Colors Value Pack” that will comprise of a PSP in the newly introduced color with accessories like a 4 GB Memory Stick PRO Duo (mark2), an original PSP pouch, a wrist strap and a cloth. The value pack will be released in the Japanese market at 24,800 yen RRP.

Sony has also introduced a “Battery Pack (2200mAh)”. It consists of a 2200 mAh battery and a battery cover in the new colors that have been introduced for the handheld consoles and it is available for an RRP of 5,500. Also, for 1,800 yen, Sony will be bringing out PSP pouches in the new colors. Both these packs- Battery pack, PSP Carnival Colors Value Pack are limited till the stocks remain.

With the new colors, the PSP is also available in its earlier trademark colors of piano black, pearl white and mystic silver, so, that makes it a big range of hues to choose from. Now it is not known if the carnival follows in other parts of the world as there is no official word on it!