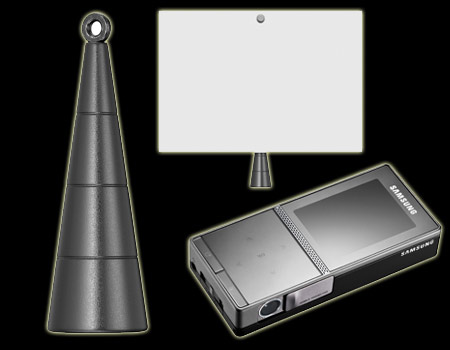 Samsung recently got the wraps of an innovative mobile phone accessory called the MBP200 Pico Projector. In a compact and light weight form factor, the projector has been design to offer users amazing projector performance with its wide functionality.

Offering easy connectivity to mobile phones as well as laptops, the MP200 projector is equipped with Texas Instruments DLP pico chip that enables users to convert their device into a large 50” viewing experience. Packed with a microSD card slot, users can also transfer files and project content that does not rely on the attached source.

Sporting a simple shape and design, the Samsung MP200 projector is bundled with a 2.2” QVGA LCD screen, touchpad controls on the right side, independent support Microsoft Office and PDF along with many entertainment functions that allows users to view video, photos or even listen to music. The device supports nearly all music and video formats along with many image formats too.

The projector weighs just 160g and is about 107.3 x 48.8 x 19 mm in dimensions making it a very portable device. Powered by a smaller version as the imaging technology found in Samsung HDTVs, additional features of the Mp200 Pico projector include 3.5mm standard jack, and a built-in speaker. Accessorized by a small screen holder that has a telescoping pole hidden within, the projector offers instant conversion of a regular sheet of paper into movie screen viewing.

The Samsung MP200 is expected to start shipping around later this year. The price is also a mystery.