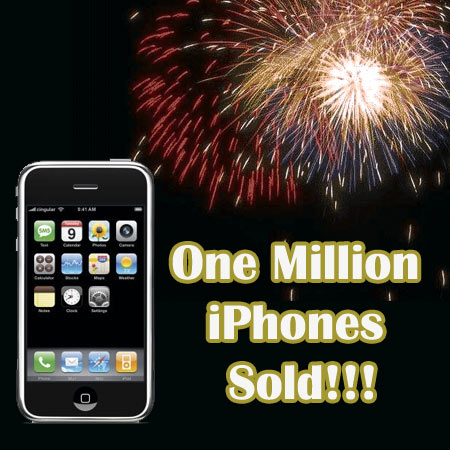 Apple seems to be having a roller-coaster ride these days. It’s constantly in the news for something or the other.

And guess what, it’s back in news once again!

We just got a press release in our inbox that stated that on Sunday, Apple sold its one millionth iPhone. The device has attained this amazing feat within just 74 days of its launch.

An excited Steve Jobs, stated, “One million iPhones in 74 days-it took almost two years to achieve this milestone with iPod.” Adding, “We can’t wait to get this revolutionary product into the hands of even more customers this holiday season.”

In the month of July, Jobs had said, “We’re thrilled to report the highest June quarter revenue and profit in Apple’s history, along with the highest quarterly Mac sales ever.” Adding, “iPhone is off to a great start—we hope to sell our one-millionth iPhone by the end of its first full quarter of sales—and our new product pipeline is very strong.”

Well, this target has been achieved. The next target is to sell 10 million iPhones by the end of 2008. Let’s see if the company can achieve this one too.

But all the same it’s important to note here that just recently Apple announced the highly shocking dip in the price of the iPhone, where the device which was originally priced at $599 went down to just $399, having a $200 slump (Not to mention the fiasco amongst the public thereafter). If Apple was already so close to its goal, then wonder what the main reason behind the drastic price drop was. “Holiday season” has been cited as the main reason, but is that the real reason. Perhaps it is, you never know!