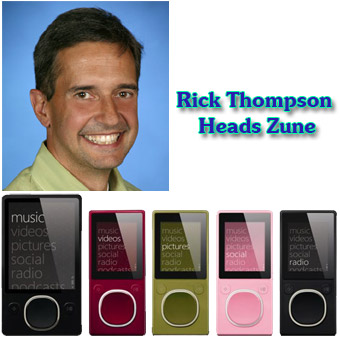 Microsoft is going to leave no stone unturned to make its latest Zune players a success story. The latest move in this is the appointment of Microsoft old hand Rick Thompson.

Just within a few days of Zune’s official announcement, Microsoft made known the name of the man who is going to manage the Zune media player, reported The Wall Street Journal.

Taking the role of VP of Zune, several of the business-development duties earlier taken care of by Microsoft’s entertainment-and-devices corporate vice president J Allard, will now be handled by Thompson.

To prove the worth of the latest Zune models over most other media players in the existing market, Thompson will firstly run an entirely revamped product line. He will have to take care of Zune’s business development, which comprises of supervising relationships with the music industry and content providers. Thompson bid adieu to Microsoft in 2000, but he returned after two years to run the development of the operating system software for Windows Media Center and the Tablet computers.

On the other hand, Allard has been managing Zune since the exit of Bryan Lee in February. Allard will continue to direct design aspects of Zune.

Thompson joined Microsoft in 1987, and since then has made worthwhile contribution to the company. He played an important role in developing Microsoft’s hardware business and in 1991 was named as general manager, and was on the position for many years. After which he was appointed the first general manager in charge of the Xbox, supervising the founding team.

Microsoft’s Zune, which was essentially touted to put cut throat competition to Apple’s iPods, didn’t exactly have a successful first innings. However, this time around Microsoft has added new features such as an ability to use a wireless connection to synchronize content with Windows-based computers and to share songs with other nearby Zunes.

Along with the Zunes, Microsoft released Zune Social, Marketplace and Software Updates for the new 2nd Generation Players