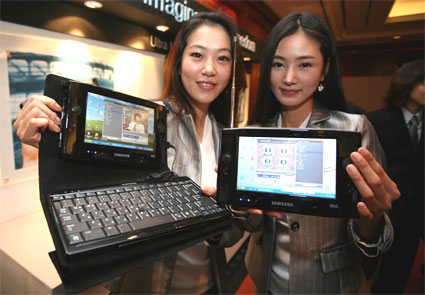 Samsung has sent invitation to journalist for the launch of its Ultra-Mobile PC Q1 on May 1.

Samsung had previously given a sneak peak of its Q1 Origami at the CeBit trade show in Germany in March.

The Samsung Q1 UMPC / Origami launch will be held in San Francisco, it will be the first device based on Microsoft’s Origami concept.

Ultra-Mobile PC’s look like a small Tablet PC with 7-inch touch screen, and run on Windows XP with special software.

Samsung is expected to release their UMPC / Origami device with optional GPS and DMB mobile digital TV expansion modules and even a WiBRO support. Samsung Q1 will also support Bluetooth 2.0 with A2DP and features a 30GB hard drive.