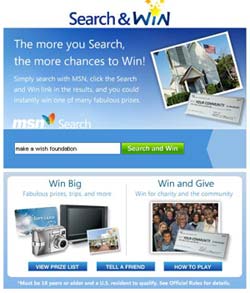 MSN on Monday announced a contest through which users have an opportunity to win prizes just by using the service’s search engine. Prizes over $1 million can be won during the months of February, March and April.

1,200 keywords would be initially linked to prizes this month, with more keywords added in March and April. Users would find out if they were winners in the subsequent result page after entering their search term.

In a statement MSN Search marketing director Lisa Gurry said, “Whether you want to win a cool prize or give back to your favorite charity, now is a great time to try MSN Search.”

MSN which has held a consistent third position in search engine ratings behind market leaders Google and Yahoo is not searching for opportunities to lure users to make the transition. Till date most of the efforts and plans initiated by the company have gone in vain, promotions maybe its new tool to entice people.