TechShout
Home Gadgets Pastor arrested in the middle of a Sermon 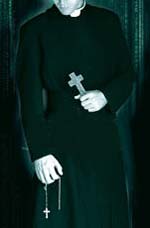 Rev. Jimmy McCants of a Lutheran parish on Chicago’s far South Side was arrested in the middle of his sermon by the police. McCants has been the focus of a dispute between rival factions at Zion Evangelical Lutheran Church.

Chicago Police spokeswoman Monique Bond said that the church’s board of directors told police the board fired McCants, 54, on Christmas Eve, and a woman associated with the church signed a complaint against him for trespassing on church property

However a Lutheran Church official claims that the board fired McCants without taking the proper steps to resolve disputes.

“They have removed a pastor inappropriately,” said the Rev. William H. Ameiss, president of the Northern Illinois District of the Lutheran Church Missouri Synod. “The real tragedy is the ministry gets put on hold for a power struggle.”

McCants was not handcuffed when police led him out of the church Sunday. He was booked on a misconduct charge of criminal trespassing and released in exchange of a $1,000 bond.

“My church is the house of the Lord, and I had not committed a criminal act,” McCants said. “We’re going to see what the lawyers say. I intend to go back next Sunday.”