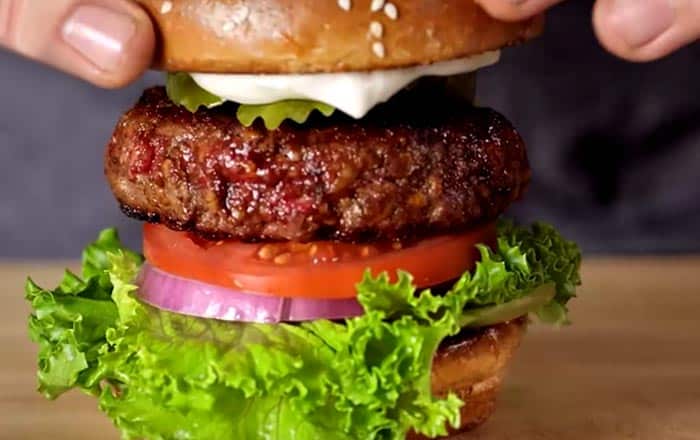 A meatless burger that looks, smells and tastes like beef has made its debut in San Fransisco. Five years in the making, this alternative to meat by Impossible Foods, is a vegan patty which appears to be so convincing, anyone could be fooled into thinking it’s sourced from animals. San Francisco’s popular Jardinière restaurant introduced it at a pop-up event recently and will add it to the menu in July.

The meatless burger was served with avocado, caramelized onions, vegan dijonnaise and the works. The key constituent which allows the vegan patty to imitate beef is heme. This molecule containing iron, lends meat its red color and a vaguely metallic flavor. Instead of obtaining the heme from plants, the soybean gene that encodes the protein was extracted and then transferred to yeast.

Impossible Foods which got $183 million in funding last year, is not the first ever company to offer a plant-based alternative to meat. Beyond Meat already sells a pea protein-based burger which promises to ‘sizzle’ like the real thing. Others have been experimenting with lab-grown meat that is expected to put an end to traditional animal farming within the next few decades.

Why do we need an alternative to real meat?

Vegan burgers mimicking the taste and appearance of meat is not some hipster trend which will disappear in the near future. Cattle rearing for meat is inhumane, needs a lot of space, consumes precious resources like water, is unsustainable when it comes to converting plant proteins into animal proteins and so on.

The industry struggles to keep up with the ever increasing demand for meat anyway. Stem cells extracted harmlessly from an animal’s muscle are all you need to produce pounds of meat. Those who cannot stomach the idea for whatever reason, may find an answer in products by companies like Impossible Foods.

Researchers are not really targeting vegetarians who’d like to know what it feels like to eat beef, with their vegan burgers. They are instead attempting to provide a solution to meat-eaters willing to try an alternative to animal-based proteins.