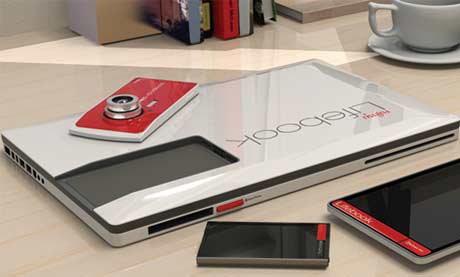 Designer Prashant Chandra has aimed to develop a laptop which not only pairs up with a handset, a camera and a tablet, but also integrates these detachable gadgets into its form factor with the Fujitsu Lifebook 2013 concept. Building on the principle of shared hardware, this development brings in a detachable camera, a mobile phone which also acts as a music player and a tablet that doubles up as a keyboard.

A post on Yanko Design shares that the Lifebook 2013 doesn’t sport a keyboard of its own, but rather embeds the tablet in a slot, complete with a 16-pin connector. The moment the slab is docked, it performs the role of a full size QWERTY. Furthermore, the data on the tablet gets automatically synced to the notebook. Users can also enjoy dual screens by switching to tablet mode from the keypad, when the slab is incorporated in its slot. 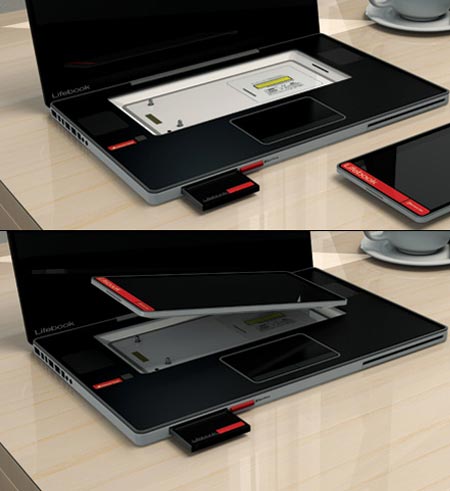 The mobile phone which also serves as a music player, will function in a manner much like the slab. Simply integrating it in the slot on the laptop will trigger data and hardware sharing to boost the overall performance. The additional benefits of such a system are no cord hassles, single point charge for the included gadgets and also a uniform place to receive software updates for all devices.

The Fujitsu Lifebook 2013 concept is still in the pipeline.