In addition to the Kyocera Hydro, another water-resistant smartphone dubbed Fujitsu Arrows X F-10D docomo Next series, is here to claim its share of the limelight. This rugged device headed to NTT Docomo in Japan, also boasts of a powerful internal system comprising a quad core processor and a 12-core GPU amongst others.

The handset in question is powered by the Nvidia Tegra 3 quad core chipset which can clock in a speed of 1.5GHz. It has also been integrated with a 12-core GPU supported by Nvidia GeForce technology to deliver clear pictures on its 4.6-inch HD LCD screen. Moreover, the phone is deployed with a smart fingerprint sensor along with a dedicated switch to activate it. This should cut down on the risk of unauthorized access to personal content saved on it.

Slated to run the high-speed Xi communications service of NTT Docomo, this smartphone draws power from a 1,800mAh battery to support internet surfing and gaming on the move. And if that’s not all, the manufacturer has added a 13.1MP primary camera to the mix, along with a 1.3MP front-facing webcam to facilitate video conferencing over the web. Featuring the company’s Human Centric Engine, the handset is capable of adapting itself to noisy environments too. 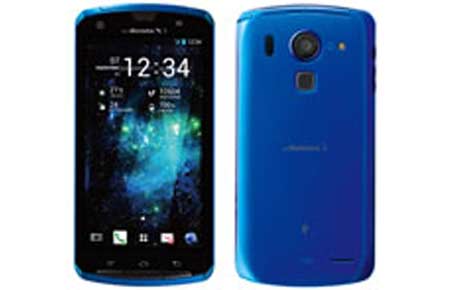 Besides, the phone has acquired IP5/8 and IP5X ratings to offer resistance against dust, spills and splashes. Compatible with infrared communications, the Fujitsu device can also recognize natural handwriting and supports wireless charging with Okudake-Juden. It comes drenched in shades of black, white and blue.

The Fujitsu Arrows X F-10D price has not been given a mention. It will hit store shelves on July 20, that’s tomorrow.