The new Fujitsu Arrows NX F-04G smartphone has just been launched in Japan, with an eye scanner onboard. This device is being offered exclusively by one of the country’s premier carriers, NTT DoCoMo. It’s a flagship-grade device which is apparent through its other hardware attributes.

But first let us talk about the iris scanning tech present on it. It’s called Iris Passport, and it allows the Fujitsu Arrows NX F-04G handset to get unlocked within half a second of you looking at it. It can be used by apps that require passwords and also for payment authentication.

Fujitsu has said that this security measure is so foolproof that it can even distinguish the differences between the eyes of twins trying to unlock the same device. The Iris Passport even bears the ability to learn more about your eyes each time you unlock your handset using the technology. 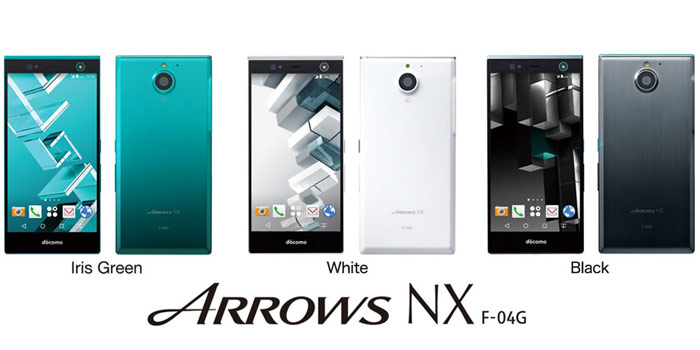 The grabs a 5.2-inch Quad HD display, and runs the Android 5.0 Lollipop OS. This setup is accompanied by an octa core 64-bit Snapdragon 810 processor and 3GB worth of RAM. Furthermore, this LTE-A smartphone has been revealed to feature a 3120mAh battery, an Adreno 430 GPU and a 21MP main camera, among other advanced offerings.

A neat look at the main specs of the new Fujitsu Arrows NX F-04G handset:

Right now, the Fujitsu Arrows NX F-04G is only meant for Japan where it will be sold by NTT DoCoMo at the equivalent of $750. There’s no word on whether or not it will be released in other markets in the future.