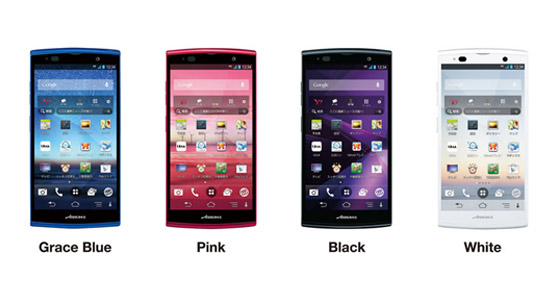 There’s a new smartphone on the block in the form of the Fujitsu ARROWS A SoftBank 202F, and the interesting part of this product is that it boasts of a 3,000mAh battery which is claimed to last over two days. And all this while powering a 5-inch full HD display and a host of other premium components granted to it by Fujitsu. So far, Japan seems to be the only recipient of this device which is slated to arrive there on June 28.

The high-capacity power source of the Fujitsu ARROWS A SoftBank 202F combines with the company’s energy-saving Human Centric Engine to deliver its long running time of over two days under normal usage conditions. It can be noted that the recently unveiled Butterfly S from HTC has gained an even larger power pack of 3,200mAh in capacity. It remains to be seen then how both will perform against each other.

The 1080p 5 incher which sits on the front surface of the Fujitsu ARROWS A SoftBank 202F is capable of Full-Seg HD broadcasts as well. Furthermore, there’s a Snapdragon 600 processor underneath its hood, offering quad core speeds at 1.7GHz. The phone bears on it a 13.1MP HDR-capable snapper which is complemented by the company’s Perfect Tuning technology aimed at capturing better images. There’s even a front camera present on the device for video calling purposes.

This phone is water and dust resistant since it grabs IPX5/8 and IP5X ratings. A whopping 64GB worth of internal memory has made its way into the Fujitsu ARROWS A SoftBank 202F. Another important aspect of it is the smart fingerprint sensor which protects important data based on a user’s fingerprint input. Besides, DLNA, NFC and other such essentials have also been granted to the smartphone.

As mentioned above, the ARROWS A SoftBank 202F seems like a Japan-only deal as of now. There’s no price for it yet.