Fujifilm X-M1 price in the US comes forth 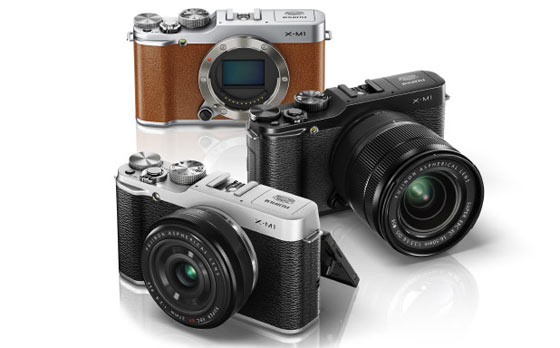 The Fujifilm X-M1 is a new compact system camera (CSC) with a retro-styled body which the company unveiled just yesterday. This interchangeable lens device is the third entry to the series from Fujifilm, and carries a 16.3MP APS-C X-Trans CMOS sensor which we’ve already seen on the Pro1 and E1 from the X Series. Its release date is set to fall during July, and interested parties can get ready to shell out $699.95 (body only) on it.

A new Fujinon XC16-50mm (24-76mm) F3.5-5.6 OIS zoom lens has also been unveiled for it, with attributes that make it favorable for wide angle to mid-telephoto range images. Embracing 12 all-glass elements in 10 groups which include 3 aspherical elements and 1 ED element, this lens is also said to be apt for low-light scenes, portraits as well as colorful landscapes.

As mentioned above, the Fujifilm X-M1 kicks in a 16.3MP APS-C X-Trans CMOS sensor, while it also features an EXR Processor II which gives the snapper the capability to provide a start time of 0.5 seconds. The camera’s sensor offers a basic ISO range or ISO200 to ISO6400 in 1/3 step increments, and it moreover even makes an extended range of ISO100 to ISO25600 possible.

The Fujifilm X-M1 compact snapper weighs in at 11.6oz, whereas its profile stands at 1.3 inches at its trimmest point. There’s a 3-inch tilting LCD screen on the device as well, apart from a built-in high precision flash featuring the Super Intelligent Flash technology. The Fujifilm X-M1 also comprises of a Wi-Fi button, enabling transfer of pictures and videos to smartphones, tablets and computers.

Another important attribute of the camera is its ability to shoot 1080p full HD movies at 30fps. Those interested can take note that the $699.95 price tag of the X-M1 only applies to its body which will be released in black and silver shades this July. A bundle containing the body as well as the above mentioned lens will sell at $799.95, starting the same month. The brown-colored body on the other hand, will be made available in August.