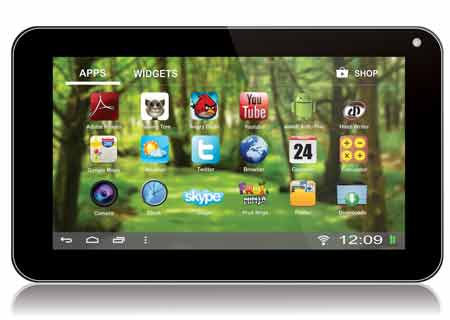 The Fujezone MT-12 tablet has joined the wide catalog of slates in the country that are aimed towards budget-minded customers. The competitors this low-cost device will be up against include the likes of the recently launched Zync Z1000 and the HCL ME G1, amongst others.

Like a lot of other cost-effective slabs out there, this one manages to cramp in a host of average features. Some of the main highlights employed here are the Android Ice Cream Sandwich platform and various pre-loaded applications as well as games. The device doesn’t come with cellular support. However, the company is offering it with a free Fujezone 3G data card for browsing the web, streaming content and downloading stuff online, which can also be done over Wi-Fi.

Coming to the tablet’s technical specifications, it is said to tag along a 5-point multi-touch HD capacitive touchscreen spanning 7 inches wide. Tucked away within its sleek form factor are a 1.2GHz ARM Coretex A8 processor and 512MB of RAM for smooth multitasking. Users will have approximately 4GB of built-in storage for hoarding content. And if it were to fall short, there’s also a microSD card slot which supports up to 32GB. The slate weighs 0.75kg and packs in a 0.3MP primary camera for snapping up images and recording videos.

The Fujezone MT-12 can be picked up for Rs. 6,199 through various retail outlets and the company’s own distribution channel in multiple states. Seventymm is offering the tablet at a slightly discounted rate of Rs. 6,140 which covers a soft case and a 2GB memory card too.