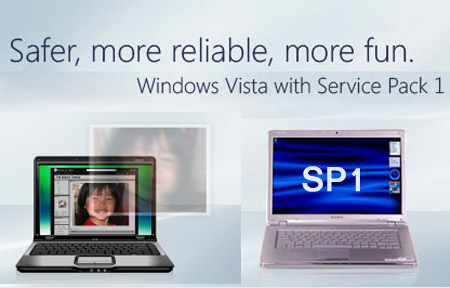 A few days ago, we reported about the tentative arrival of the much-awaited Windows Vista Service Pack 1. Microsoft has kept up to its promise and has made SP1 available to all as a download. Vista SP1 includes a number of updates and security fixes for Microsoft’s newest operating system.

According to Microsoft, the Vista Service Pack 1 would improve the operating system’s reliability, security and performance. However, the software giant also mentioned that a number of these fixes had already been released during monthly updates since Vista’s launch over a year ago.

From the time that the Vista operating system was launched, users have been experiencing a number of problems and issues related to performance and security. And, thus the Service Pack 1 was highly anticipated by these users.

But, industry analysts have given mixed reviews on whether the updates make a difference at all, and whether they even make their Vista experience better.

According to Michael Cherry of the research group Direction on Microsoft, the time it took to copy files over a network returned back to normal with SP1. He thus feels that the operation is speedy, similar to that experienced when using Windows XP. However, he did mention that SP1 failed to fix the ability to wake his PC from sleep mode.

An analyst was even quoted as saying that it took over an hour to install SP1 on each of two of his computers. But, once updated they were speedier and less prone to crashing.

Lastly, Microsoft had confirmed that the SP1 update would break some programs including a few smaller antivirus applications for reliability reasons.

Microsoft has also said that a few programs would not be able to run on SP1 including Web application design program Iron Speed Designer. The New York Times Reader application would also stop working well with SP1.

Vista users will be able to get the SP1 update by running the built-in Vista Update tool or by visiting Microsoft’s Web site. As of now, SP1 is available for Vista copies in English, French, Spanish, German and Japanese. But, versions in other langaues are expected to be released by mid-April.