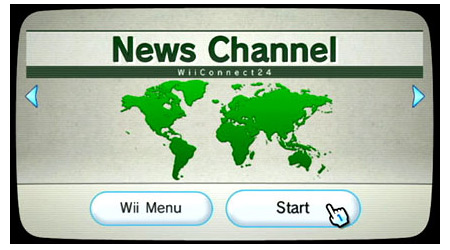 Associated Press (AP) and Nintendo have jointly introduced the Wii News Channel for all the owners of Wii – the next-gen Nintendo console. The channel which was launched on Saturday enables Wii users to access news in an interactive way.

Consoles with a broadband internet connection and the Opera web browser will be able to access the free news channel, which will offer AP news in multiple language, such as English, French, Spanish, Dutch, German, and Swiss-German. Japanese-language news will come from a separate agency.

Nintendo of America President Reggie Fils-Aime said, “What Wii has done for video gaming, we hope it will also accomplish for news. Just by pointing at your TV screen, you become your own interactive editor, instantly accessing the latest headline stories, whether they originate in Kansas City or Kyoto.”

“The Associated Press is always looking for innovative ways to expand its audience for news and information. The Wii News Channel extends our global reach even further, on yet another platform, offering our news to people who otherwise might not see it,” said Jane Seagrave, VP and director of AP’s digital division.

The Wii News Channel features a simple user interface, which allows Wii owners to revolve a virtual globe and point to the location of a news event using the Wii Remote. The news stories will be posted under headings such as Business, Sports, Arts/Entertainment, Technology and Science/Health.

The AP has a two-year contract to offer news and photos to Nintendo and would like to provide multimedia in the future, added Seagrave.

“It’s a very innovative new application of what we’re doing generally, which is to try to get our content to new audiences on new platforms,” Seagrave continued.