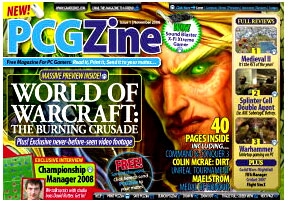 Cranberry Publishing has introduced ‘PCGZine’ – a free e-magazine reporting on PC games. Gaming enthusiasts can download the magazine free and without the need of registering.

Cranberry is not new to this forte, in the past it has launched a free e-magazine dedicated to Xbox 360 games.

PCGZine, Dan Hutchinson, editorial director, said, “Our writers have worked on some of the UK’s biggest PC games magazines and so we’re now bringing the quality of writing and design that you’d normally expect only from a print magazine to readers for free.”

PCGZine features some of the best writing from a team of experienced game journalists.

Issue 1 of the pc games magazine is available for download now, and features a 4 page preview of World of Warcraft: The Burning Crusade. The pc game magazine issue also includes previews of Maelstrom, Unreal Tournament 2007, Command and Conquer 3, Colin McRae’s DIRT and an exclusive interview with the developers of Championship Manager who talk about CM2008. There are also reviews of Medieval II, Warhammer: Mark of Chaos, Guild Wars: Nightfall, FIFA Manager, and EA Cricket, amongst others.

“The response from gamers to the launch of our 360Zine has been brilliant,” said PCGZine, Dave Taylor, publishing director. Taylor added. “We’re very excited to bring our second emagazine launch out in the same month. 360Zine’s success shows that people are now ready to digest their information in the e-magazine format and we believe PCGZine will match the success of its sister title.”