Free Casino Royale Blu-ray Discs to be given to the First 500,000 PS3 Registrants on PLAYSTATION Network 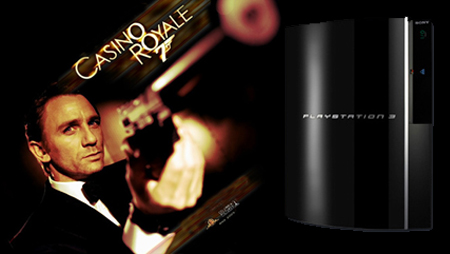 The company has announced a special offer, where all the first 500,000 buyers of PS3 who registered on the PLAYSTATION Network will receive Blu-ray discs of Casino Royale.

Speaking on this, Darren Carter, VP Brand and Consumer Marketing said, “The PLAYSTATION Network lets loose the broad range of interactive entertainment features of PLAYSTATION 3. It is easy to set up, presents free online gaming, has vast tools for staying in touch with friends and family, and comprises of a wide variety of content for download through the PLAYSTATION Store. All this, and more, will facilitate users to experience a whole new world of interactive entertainment, and that is why we are offering the exceptional incentive of Casino Royale, on Blu-ray disc, to PS3 owners who register on the PLAYSTATION Network. Casino Royale not only makes the most of the features and capabilities of the Blu-ray format, but also is one of the most exciting and entertaining movies to debut on Blu-ray this year.”

The movie will be handed in a 50GB dual-layer Blu-ray disc encoded in MPEG-4 AVC with 1080p true HD resolution and uncompressed audio.

So if you were just about to throw out your console (thanks to the games offered on it), then STOP, cause you surely have a better reason to keep it now.