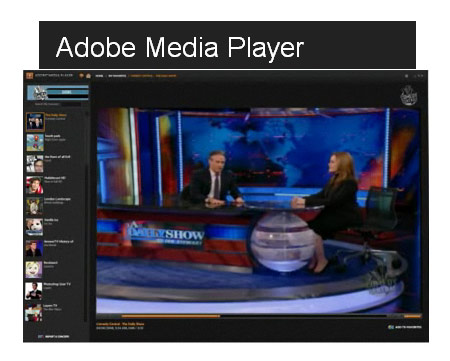 Adobe has released the all-new Media Player 1.0 software. The Adobe AIR application is a customizable, cross-platform media player through which users get interesting new ways to discover and interact with their favorite content, and the platform simultaneously offers revenue and brand-building prospects for content owners and media publishers with new ways to distribute, measure and build businesses around video content. Leading content publishers such as CBS, MTV Networks, Universal Music Group, PBS, CondéNet, and Scripps Networks have worked with Adobe to offer a wide array of television programming and entertaining video content to the audience.

John Loiacono, senior vice president of Creative Solutions at Adobe said, “With Adobe Media Player, we’re bringing viewers and content owners closer together, with an experience that doesn’t constrain them by platform or proprietary software application.” Adding, “It’s a merger of TV Guide and DVR for Internet video content. Some great shows, like The Hills from MTV and CSI from CBS, is already available to view and more will be coming soon.”

The latest Adobe Media Player offers optimum quality playback of streamed, downloaded or locally-stored video in the Adobe Flash format. For the very first time, users get the opportunity to download video outside the browser in the Adobe Flash format, which can be viewed in 1080p, 720p or 480i video display resolutions with the most advanced audio quality.

In addition, users can also subscribe to television shows and other online video content and then automatically receive new episodes of the shows as and when they release. In order to help the audience learn about the latest content, a broad, searchable catalog of shows from leading media companies and networks has been made available, which is expected to continuously expand to include videos from other broadcasters, studios and independent producers.

Interestingly, in Adobe Media Player, viewers can subscribe to free content, giving them control to watch their favorite shows both online and offline. In addition, the new platform also offers next-generation offline monetization and branding options, such as viewer-centric dynamic advertising for targeted marketing campaigns and the capability to customize the look and feel of the player to match the brand or theme of the video content. Furthermore, content publishers can also get measurement of content usage data, such as when and how often a video has been viewed, in addition to supporting protection options such as protected streaming, advertising protection and video DRM protection.

The Adobe Media Player is available right away as a free download for Windows and Macintosh platforms from http://www.adobe.com/go/mp.