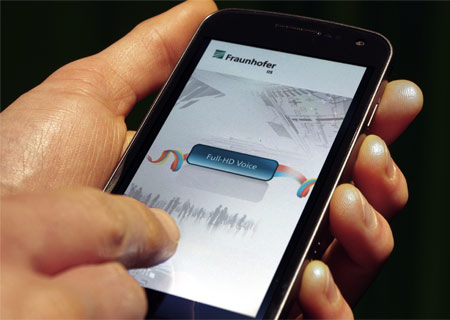 Even an average mobile buff will share our enthusiasm over Fraunhofer gearing up to present the world’s first Full-HD voice calls on Android phones over LTE at the upcoming MWC 2012. Why? Well, the codec employed by this technology will apparently have the ability to enhance the audio bandwidth of regular phone calls by nearly four times while HD voice services get a push up by twice as much, without any alteration in the bit rate.

Interactive Full-HD voice is already available in a range of VoIP, conferencing and video telephony systems. Fraunhofer’s latest effort though will see Full-HD voice calls on Android phones over LTE being explored for the first time. The present scenario has most phone calls restricted to the 3.5kHz frequency range though improvements in the field have witnessed a handful of operators increasing the upper limit to as much as 7kHz. Fraunhofer’s Full-HD voice codec AAC-ELD looks at taking advantage of the fact that humans can perceive audio signals up to 20kHz.

“Every day, millions of users already make Full-HD voice calls over IP connections,” shares Harald Popp, head of the department Multimedia Realtime Systems at Fraunhofer IIS. “With the introduction of LTE, now is the perfect time to introduce Full-HD Voice to mobile communications as well. Our AAC-ELD audio codec is the perfect solution for all upcoming mobile Full-HD Voice services.”

Adding a completely new dimension to audio quality, Android mobile users can anticipate engaging in calls that are loud and clear. At the MWC, the Fraunhofer booth will be offering a live-demo of this technology on Android phones which are incorporated with the Full-HD Voice codec AAC-ELD. An LTE network supported by Fraunhofer HHI will be connected to these Android phones.

And it isn’t just the quality of Full-HD voice calls on Android phones over LTE that get an upscale, the AAC-ELD codec will seemingly transmit music and other audio signals too at a quality level on par with HDTV and Blu-ray. Interesting.