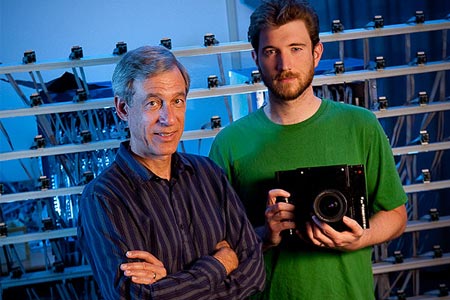 Here’s some really exciting news for photo enthusiasts and programmers alike. Recently scientists from Stanford made public a ground-breaking open source digital camera dubbed Frankencamera that should take the world of digital photography to completely new levels. The camera will offer programmers across the globe an opportunity to create software that will allow them to teach novel camera tricks.

Reinventing digital photography, the technology hopes to put future camera performances beyond the manufacturer’s pre-installed software. The scientists reveal that if the technology catches on, limitations of the camera software can be overcome. The Stanford camera boasts of being fully-enabled so that practically all the features can be created by programmers. So inspired individuals can now set the focus, exposure, shutter speed, flash and more at the command of software.

“The premise of the project is to build a camera that is open source,” shares computer science professor Marc Levoy.

Andrew Adams, a computer science graduate student who helped design the prototype of Frankencamera envisages download of applications to their open-platform cameras in the future. That’s right! If the technology comes through then just like Apple apps that are downloaded to iPhones today, users may be able to download required applications. He further shares that once the camera’s operating software releases publicly, users may be able to continuously improve it. The service should keep in line with the open-source model of the Linux operating system for computers or the Mozilla Firefox web browser.

On completion of software download, programmers can then exploit their full capabilities by experimenting with new ways to play around with the various types of cameras and accessories. They can tune the camera’s response to light and motion while also having the freedom of adding their own algorithms to process the raw images in innovative ways. In addition to this, Levoy reveals plans of developing and manufacturing the camera as a platform for fellow computational photography researchers available at low minimal cost. In due course the technology should allow researchers to move beyond their labs to take their experiments into the studios, the landscapes and the stadiums.

Stanford scientists elucidate for example that the idea of extending a camera’s dynamic range or capability to take care of lighting in a single frame seems to be among the most mature ideas. Until now the process of high-dynamic-range imaging that allows capturing pictures of the same scene with different exposures to combine them into a composite image later appears to have been possible only in computers. However Levoy hopes cameras can do this right at the scene on demand just like the Frankencamera claims to do.

In addition to this, researchers also claim to have achieved another algorithm that no commercial camera allows. Supposedly the experts were able to enhance the resolution of videos with high-resolution still photographs. A camera has the ability to periodically capture a high-resolution still image while it is gathering low-resolution video at 30 frames a second. Using an algorithm into each video frame, Levoy and his team looked at recombining the additional information in the still to implement it in the camera.

Besides, the camera should also be enabled for efficient communication with computers on a network like a photo-hosting service on the Web. Users with Frankencameras would be free to discover and experiment with all kinds of other operations that might yield innovative results. The camera would allow them to gain total control of the images.

“Some cameras have software development kits that let you hook up a camera with a USB cable and tell it to set the exposure to this, the shutter speed to that, and take a picture, but that’s not what we’re talking about,” explains Levoy. “What we’re talking about is, tell it what to do on the next microsecond in a metering algorithm or an autofocusing algorithm, or fire the flash, focus a little differently and then fire the flash again — things you can’t program a commercial camera to do.”

The open source camera was created by cobbling together a number of different parts. The system’s motherboard intrinsically is a Texas Instruments ‘system on a chip’ running Linux. It features image and general processors along with a small LCD screen. While the imaging chip has interestingly been taken from a Nokia N95 cell phone, the lenses are off-the-shelf Canon lenses. The latter have been combined with actuators so that the camera attains its fine-tuned software control. Boasting of a body custom made at Stanford, the project is claimed to have benefited from the support of popular companies like Nokia, Adobe Systems, Kodak, and Hewlett-Packard.

Levoy’s team reveals that enabling a broader community of photography researchers and enthusiasts to contribute ideas the Stanford group has not imagined is the real goal of the camera. While they may want to implement many ideas, the success of Camera 2.0 will be accounted by the number of innovative capabilities the community can add to in the possibilities of photography.

Levoy hopes to develop the camera to his full satisfaction within about a year. He also looks forward to gain the funding and the arrangements required for an outside manufacturer to produce them in quantity. They should typically be produced for less than $1,000.