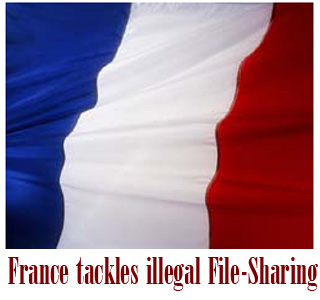 If you reside in France and are constantly engaged in downloading illegal music and films, the Beware! For a fact, Piracy is rampant in France, thanks to the high download speed of their internet services. A new anti-piracy system introduced in France attempts to block internet access who indulge in such malicious activities. The deal was signed under the presence of France President Nicolas Sarkozy. All the same there are yet several members of the Parliament who were of the view that the system would be breaching on civil liberties.

The newly launched anti-piracy system makes it possible for Internet Service Providers to cautions users twice when they are caught downloading illegal music files or complete films. But if the user insists on giving up on his activity then the respective ISP has to resort to shutting down the internet connection.

The mechanism will be developed by an independent panel that will keep an eye of the move of illegal file downloading by users. Further on, this panel will also be responsible for setting limits as to the amount of times ISPs have to warn users before shutting down their Internet connection.

Sarkozy termed the latest plan as a “decisive movement for the future of civilized Internet.” He added that he was backing this move because “we run the risk of witnessing a genuine destruction of culture.”

John Kennedy, head of the music industry’s trade body IFPI was optimistic of the new move by the French government.

“President Sarkozy has shown leadership and vision. He has recognized the importance that the creative industries play in contemporary Western economies,” maintained Kennedy. “This is the single most important initiative to help win the war on online piracy that we have seen so far.”

But everything is not as rosy and fair as it may seem! Music labels need to discard technical barriers and put their files online in exchange for the French Government’s step to punish users who download music for free.