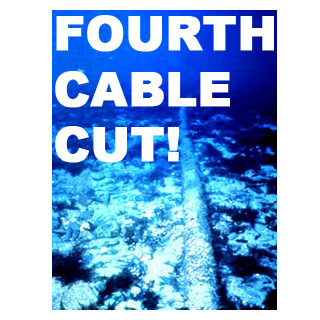 Most of you must be aware of the popular line which goes, “Once is happenstance. Twice is coincidence. The third time it’s enemy action.” The question is what to call it when it has been done for the fourth time! Last week, we had reported that two under sea cables had been cut. After that one more undersea Internet cable was cut in the Middle East.

Now it has emerged that one more undersea cable has been cut. This cable was running between the Das Island in the UAE and the Qatari island of Haloul. There are speculations that the problem is related to power system. The other three cables were cut due to an anchor of a ship. However, that is not the case for this cable. There are indications that it will take atleast a few days to fix the problem.

Internet users in the United Arab Emirates were unaffected but it is yet to be ascertained how much of the internet traffic in the Indian sub-continent will be affected. Analysts have mentioned that there could be a short-term impact on the internet traffic in India. Three cables were already down and with the fourth one being damaged, there are warnings that there would be a lot of load on the existing systems.

Repair work has already started on the first two damaged internet cables and FLAG telecom has said that a repair ship was scheduled to visit the location of the third damaged cable soon. Though FLAG has played down any net blackout conspiracy theory, forums all over the internet are full of debates putting forward hundreds of theories.

One such frivolous theory that caught our eye was that agencies are cutting undersea cables to stop file-sharers! I am sure our readers have some theory of their own and it would be great to read them in the comments section below.